Tuna and mackerel populations worldwide down a 'catastrophic' 74 percent: report 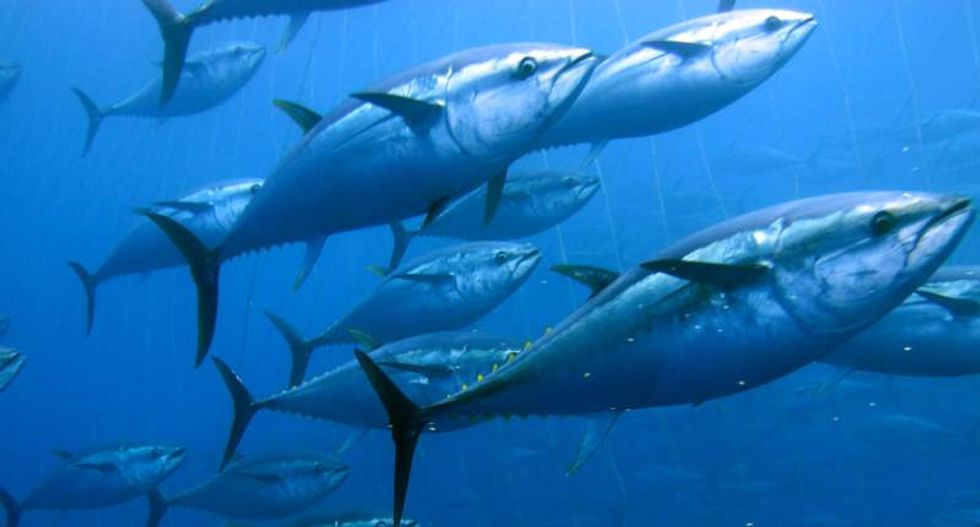 Tuna and mackerel populations have suffered a “catastrophic” decline of nearly three quarters in the last 40% years, according to new research.

WWF and the Zoological Society of London found that numbers of the scombridae family of fish, which also includes bonito, fell by 74% between 1970 and 2012, outstripping a decline of 49% for 1,234 ocean species over the same period.

The conservation charity warned that we face losing species critical to human food security, unless drastic action is taken to halt overfishing and other threats to marine life.

Louise Heaps, chief advisor on marine policy at WWF UK, said: “This is catastrophic. We are destroying vital food sources, and the ecology of our oceans.”

Attention in recent years has focused on species such as bluefin tuna, now on the verge of extinction, but other close relatives commonly found on restaurant menus or in tins, such as yellowtail tuna and albacore, are now also becoming increasingly scarce. Only skipjack, also often tinned, is showing “a surprising degree of resilience”, according to Heaps, one of the authors of the Living Blue Planet report, published on Wednesday.

Other species suffering major declines include sea cucumbers, a luxury food in Asia, which have fallen 98% in number in the Galapagos and 94% in in the Egyptian Red Sea. Populations of endangered leatherback turtles, which can be seen in UK waters, have plummeted.

Overfishing is not the only culprit behind a halving of marine species since 1970. Pollution, including plastic detritus which can build up in the digestive systems of fish; the loss of key habitats such as coastal mangrove swamps; and climate change are also taking a heavy toll, with the oceans becoming more acidic as a result of the carbon dioxide we are pouring into the atmosphere.

“I am terrified about acidification,” Heaps told the Guardian. “That situation is looking very bleak. We were taught in the 1980s that the solution to pollution is dilution, but that suggests the oceans have an infinite capacity to absorb our pollution. That is not true, and we have reached the capacity now.”

She predicts that all of the world’s coral reefs could be effectively lost by 2050, if current trends are allowed to continue unchecked, and said that evidence of the effects of acidification – which damages tiny marine animals that rely on calcium to make their shells and other organs - could be found from the Antarctic to the US west coast.

Although overfishing is a global problem, the Pacific is of particular concern, as the Chinese, Japanese and Korean fleets are among the world’s biggest, greater in size and fishing capacity than Europe’s.

Chinese fishermen are also increasingly fishing in other waters, expanding their reach.

Shark-finning, the practice of removing only the fins from sharks and throwing the bodies back, to make the Asian delicacy shark-fin soup, has taken a severe toll on stocks, with a quarter of shark species predicted to become extinct in only a decade if nothing is done.

However, Heaps said there were solutions. “It’s not all doom-and-gloom. There are choices we can make. But it is urgent.”

Overfishing can be managed with better governance – Heaps points to the recovery in North Sea cod stocks as an example of how management can work. She also urged governments to adopt the sustainable development goals, proposed by the United Nations and including provisions for protecting marine life, at the UN general assembly later this month.

Heaps urged people only to eat fish certified as sustainable by the Marine Stewardship Council (MSC), which examines fisheries against a range of criteria to ensure that they are being properly managed. An increasing number of fisheries have been accredited by the MSC, and at present about half of global white fish stocks are certified, including many in the North Sea.

She called for more partnerships between private sector fishing fleets and governments, in order to conserve stocks. “We need to keep [fishermen] on board, because they must see that good governance is in their interests,” she said.