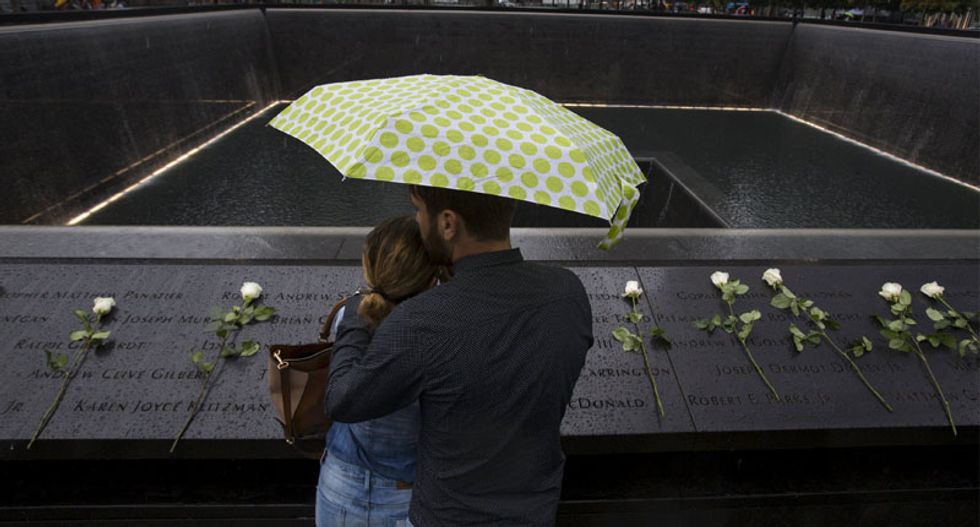 A couple stands under an umbrella at the National September 11 Memorial and Museum in Lower Manhattan in New York, September 10, 2015. REUTERS/Andrew Kelly

Relatives of the nearly 3,000 people killed in the Sept. 11, 2001, attacks are due to gather in New York, Pennsylvania and outside Washington on Friday to mark the 14th anniversary of the hijacked airliner strikes carried out by al Qaeda militants.

The ceremony in New York will follow a familiar pattern. The names of those killed will be read aloud at the empty footprint of the World Trade Center Twin Towers toppled by two hijacked airliners on the sunny morning in 2001.

Hijackers crashed two other commercial jets into the Pentagon in Arlington, Virginia and into a field in Shanksville, Pennsylvania. The New York ceremony will be punctuated by moments of silence to mark the times when each of the four planes crashed and the towers fell.

In Washington, President Barack Obama is set to observe a moment of silence to mark the anniversary at the White House. Obama also will hold a town hall-style meeting with military service members at Fort Meade, an army base in Maryland.

Defense Secretary Ash Carter is due to host a private remembrance for relatives of those killed at the Pentagon.

Relatives of the 40 passengers and crew members who died aboard United Airlines Flight 93 are set to gather at the newly dedicated Flight 93 National Memorial in Shanksville.

The passengers are believed to have fought back against the hijackers, who crashed the plane upside down at nearly 600 mph (965 kph).

In New York, the buzz of increased commerce from new residential and business towers has returned a large degree of normalcy to the area known after the attacks as Ground Zero. Next to the 16-acre (6.5-hectare) site where the Twin Towers stood is the newly opened 1 World Trade Center, the tallest skyscraper in the Western hemisphere.

"We are not going to deviate from how it was done in the past. We'll start at 8:46 a.m. and the reading of names by family members won't likely be done for a few hours," Michael Frazier, a spokesman for the 9/11 Memorial in New York, said of Friday's ceremony.

The first plane slammed into the North tower at 8:46 a.m., followed by a second plane hitting the South tower at 9:03 a.m.

The Justice Department said on Thursday a 20-year-old Florida man had been arrested and accused of plotting to detonate a pressure-cooker bomb at a memorial in Kansas City, Missouri, to commemorate the Sept. 11 attacks.