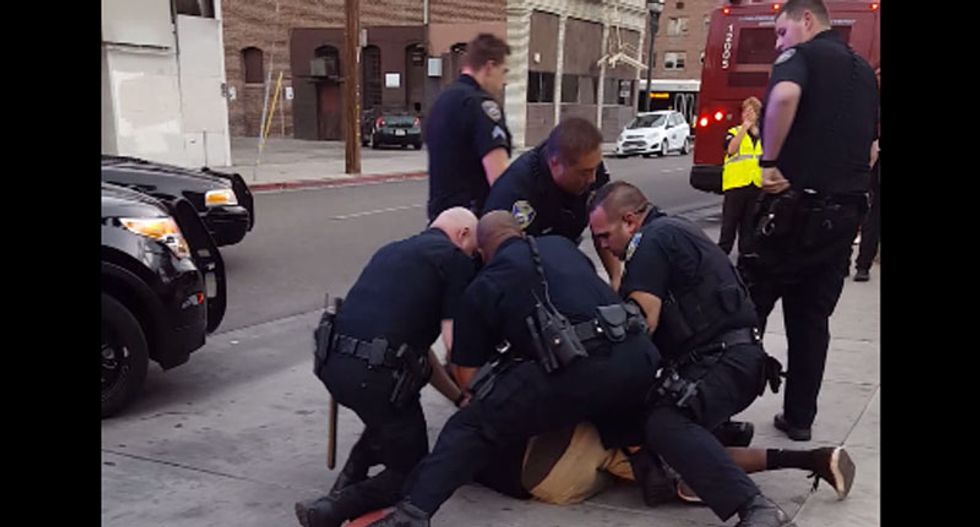 Video shows nine police California officers arrested a black teenager and slammed him on to concrete while arresting him for jaywalking.

Witnesses said a Stockton police officer ordered the teenager to sit down, but the teen instead continued walking toward a waiting bus, reported RT.

UPDATE: ‘I feel traumatized’: California teen speaks out after nine cops violently arrest him for jaywalking

Bystander Edgar Avendaño, who recorded the video, said the officer grabbed the teen's arm in attempt to stop him and then pulled out his baton after the teen "took off the cop's hand off his arm."

Stockton police told VICE News that the 16-year-old teen did not respond to an officer's request to get out of the bus lane.

"For safety reasons, the officer told the young man to get on the sidewalk," officer Joseph Silva said. "After the teenager refused to comply and used obscene language, the officer went over and a there was a scuffle."

Police said the officer was wearing a body camera, but the device was knocked off during the initial confrontation.

Avendaño's video shows the officer leaning hard on the teen, who is seated on a brick landscaping wall. The officer then uses the baton to pin the teen's ankles against his body as bystanders urge him to stop.

“It’s a f**cking kid!” a bystander yells. “Get off him, he’s been jaywalking. Leave him alone, he didn’t do anything wrong.”

The officer repeatedly orders the teen to stop resisting as the teen writhes in pain from having the baton pinned against his ankles.

The teen eventually sits up and tries to push the baton away from his legs, and the officer swings it twice at the teen's face.

The officer backs up and orders the teen, who sits on the wall holding his injured jaw, to get on the ground.

Eight other officers begin arriving at that point, and they lift the teen up and walk him several feet away from the wall before slamming the teen onto the sidewalk.

Four officers then pile on top of the teen and pin him to the ground before handcuffing him, as the other four officer stand guard and attempt to block the Avendaño's camera angle.

The officers pull the handcuffed teen to his feet, and the teen sobs as he's led to a patrol car as the bystander continues yelling at officers.

Under California law, jaywalking is an infraction, not a misdemeanor, carrying fines up to $191.