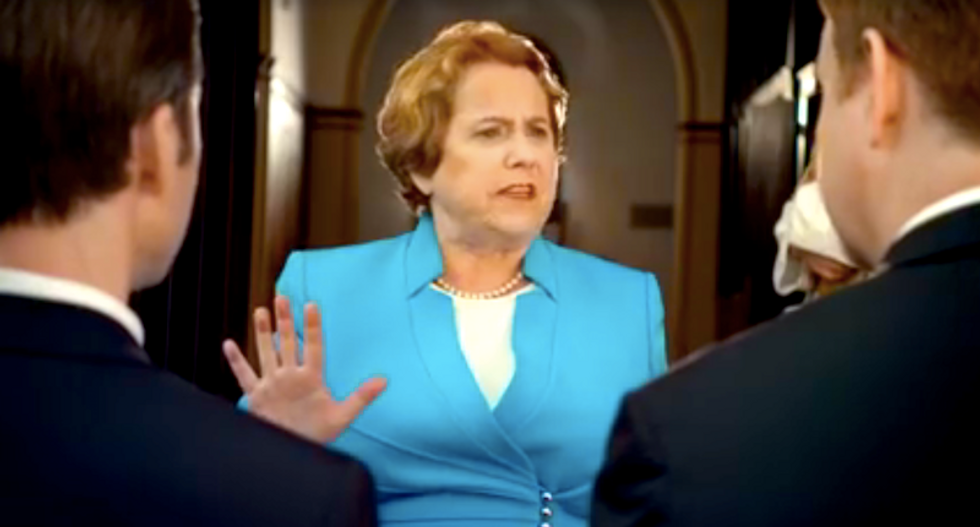 “First a clerk in Kentucky, and now a church lady in Los Angeles!" director Mark Nickelsburg posted on his Facebook page. "This same sex-couple faces yet another obstacle on the way to marriage equality in this spot I directed for Tide to Go."

Actors Matt Marr and Karl Ramsey portray a nervous gay couple outside a church on their wedding day, only to be met by a Bible-clutching woman whose expression turns severe as they approach.

“How offensive,” says the woman, played by Lynne Marie Stewart. “I won’t let you blemish the sanctity of marriage!”

The couple starts to argue with the woman, who pulls out a Tide to Go pen and removes a stain on one of the men's shirt and straightens the other's bowtie.

This is the second commercial for Tide, which is owned by Proctor & Gamble, to positively portray a gay couple, after one last year showed two men playfully bickering over laundry.

First a clerk in Kentucky, and now a church lady in Los Angeles! This same sex couple faces yet another obstacle on the way to marriage equality in this commercial I directed. Special kudos for terrific performances by Matt Marr, Karl Ramsey, and Lynne Marie Stewart.