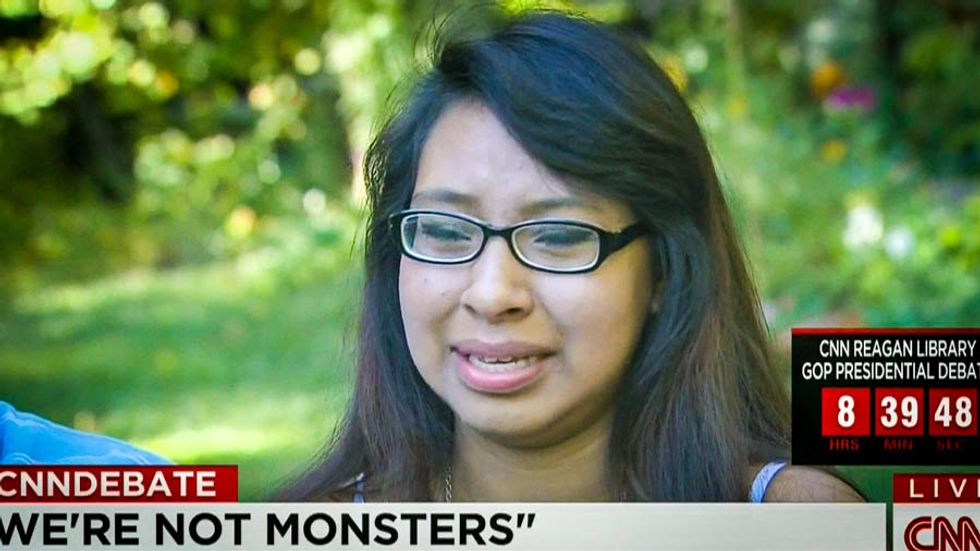 The daughter of an undocumented immigrant broke down in tears and insisted to CNN that her family were not "monsters" in response to Republican presidential candidate Donald Trump's most recent anti-Latino rhetoric.

On Monday, Trump told a group of supporters in Texas that the U.S. was a "dumping ground for the rest of the world."

"We have to end this sanctuary-cities crap fast," he insisted.

And during what was billed as a foreign policy speech on the USS Iowa in Los Angeles on Tuesday, the candidate had focused on immigration instead of the Islamic radical group ISIS or other military threats.

"The drugs pour in, and the money pours out. Not a good deal," Trump opined. "So we're going to build a wall."

In an interview that aired on Wednesday, CNN's Carol Costello spoke to a family of undocumented immigrants who had been in the U.S. for 14 years. Costello noted that the family "works hard," pays taxes and was not on welfare.

"I don't think he represents Americans," the father named Francisco explained. "We want to prove him and people who think like him that we are here working hard, and face all the time deportation."

According to Costello, Francisco's family was devastated several years ago when immigration officials raided his workplace, forcing him to spend three months in a detention center. Eventually, Catholic Charities was able to get him released.

"If he gets deported, I don't know, I'll be really sad," daughter Fatima remarked. "Because when he was in jail, I was only a little girl."

She continued in tears: "It really hurt me. He wasn't there for us. They took him away from me."

"When you hear politicians describe people coming over the border from Mexico, do you listen to them?" Costello wondered.

"No, we're not monsters," Fatima replied.