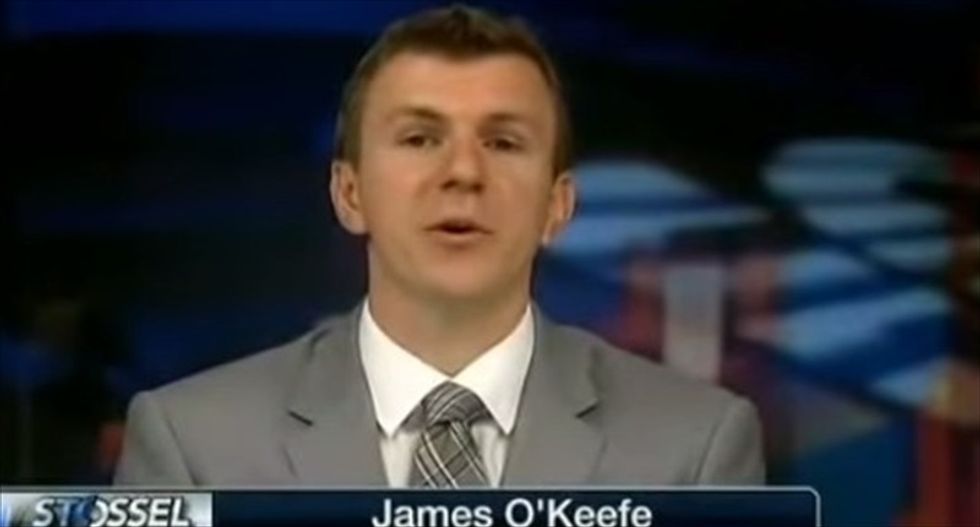 So James O'Keefe, with great fanfare, declared that he has a killer scandal that will totally take out Hillary Clinton and had a press conference to show us how he, armed only with a video camera, will derail the Clinton train by proving that her campaign takes money from foreign nationals!!!11!!!!!111!

The result was underwhelming.

The video, which will be unveiled by O'Keefe at a news conference today, reports on what happened when an undercover PVA reporter went to the merchandise line at Hillary Clinton's campaign launch. According to O'Keefe, the reporter simply happened to be near a woman from Montreal who encountered a problem when trying to buy some trinkets.

"She's Canadian and so we can't take it," says Molly Barker, the director of marketing for the campaign.

"Do you have a green card or U.S. passport?" asks Erin Tibe, the campaign's compliance manager.

Tibe explains the law. "We can't take contributions from anyone that is not a citizen of the United States," she says.

In other words, his shocking video caught campaign workers not taking money from a non-citizen. But O'Keefe and his people, being unrestrained by common sense or decency, decided it was time for a little entrapment. The activist from the misnamed Project Veritas Action group, an American citizen, then bought the T-shirt instead and gave it to the Canadian.

The right wing media is hustling this one hard, which almost makes you feel sorry for them. Almost. It is worth pointing out that you do not buy T-shirts from a campaign, but get them in return for donations. Which means that the T-shirt that the Canadian acquired is free. But more importantly, as Dave Weigel points out, "The person who takes the Canadian's money and gives it to the Clinton campaign is the Project Veritas Action journalist." If I give you something, legally, that something is yours to do with what you like. Once the money was given to the PVA activist, it became theirs and the donation became theirs. Unless they're prepared to argue that anyone who has ever had a gift given to them by a non-citizen is banned forevermore from donating to campaigns because "money is fungible" or whatever their bullshit line is these days, this one is a major bust. That, and it's over a fucking T-shirt.

Now, as Digby points out, we should never underestimate the way that irrational Clinton hatred in some corners of the mainstream media can combine with the need to demonstrate "objectivity" by pretending, sans any evidence, that Democrats are "as bad" as Republicans. But it's over a T-shirt. I don't think that even the loudest yelling about how the mainstream media is clearly out to get conservatives because they don't run with every half-baked right wing conspiracy theory is going to work in this case.

But what I found really interesting in this is that O'Keefe's narrative on this video is no different than his buddy David Daleiden's claims about Planned Parenthood in his lying videos about the organization. In both cases, lurid claims about profiteering and law-breaking were tossed around, and in both cases, it turned out that people are just participating in totally legal donation systems that exist to promote the public good. O'Keefe wants to make a "scandal" out of the fact that ordinary people can make small donations to presidential campaigns. Daleiden wants to make a scandal out of the fact that women getting abortions can donate the fetal tissue to research projects that help save lives. There's a lot of hand-waving, but if you calmly look at the facts, you'll see that both these men's ultimate goals are about making society worse, by shutting off access to reproductive health care, ending valuable medical research, and making small-time donations so fraught for campaigns that they only take money---and therefore only feel beholden to---people who can afford bigger donations.

While the scam is exactly the same in both cases, Daleiden got more traction with his hoax than O'Keefe. That's despite the fact that Daleiden's videos are almost certainly more deceptive than O'Keefe's. Last week, an analysis from Fusion GPS showed that Daleiden's group, the Center for Medical Progress, is even sleazier than you'd imagine. CMP lied about releasing the full, unedited videos, for one thing. They also injected dialogue into the captions that likely didn't happen. The short videos are worse:

Daleiden's probably a bigger liar than O'Keefe, and that's saying a lot. So why did his hoax videos take off, while O'Keefe's T-shirt bullshit, which pushes exactly the same narratives with exactly the same kind of fake "evidence", mostly get laughed at? The reasons, I think are obvious. O'Keefe's name is mud, for one thing. Journalists know that he's a liar, so they approach any claim he makes with skepticism. Daleiden took advantage of being an unknown entity. (Indeed, O'Keefe's only "win"---against ACORN---came about when he was an unknown entity.) But another part of it was clearly the optics. Daleiden made lurid accusations that made for macabre headlines. Of course, that also incentivized journalists to spend time on debunking the accusations, which has been done quite thoroughly. But not before there were some "accusations were made" type stories that helped feed the right wing myth that this is actually happening.

The takeaway from this, and I really hope this lesson is getting driven home: Be very, very careful around stuff that sounds like it is a right wing urban legend. If some activist is making accusations that sound like something your right wing uncle would put in an all-caps email forward, be very cautious in handling. Double down on your research about who is behind it and how likely it is that what they're claiming is true. Odds are, I hope it's clear now, that they're lying.

Arizona Republicans are struggling to figure out new reasons to throw out some of the ballots cast for President Joe Biden.

The Republican Party was given all of the ballots where the absence of accountability could even allow GOP "auditors" to change votes and alter any of the paperwork without anyone knowing.

On CNN Monday, correspondent Jim Acosta elaborated on the damage social media bans like the newly upheld suspension from Facebook have done to former President Donald Trump's political brand — and his self-confidence.

"Not surprisingly, the former president lashed out after the decision, accused the social media companies of decimating the electoral process, apparently with zero irony there," said anchor Anderson Cooper. "After covering this so long, it's kind of exactly what we thought was going to be happening. He is still talking to anybody who will listen down in Mar-a-Lago, repeating these same lies over and over and over again."

On Wednesday, The Daily Beast reported that a New Jersey man who participated in the violent invasion of the U.S. Capitol on January 6 was nabbed by the FBI because of a conversation between two grandmothers — one of whom happened to be the man's mother.

"Authorities say that days after the insurrection, the mother of Robert Petrosh Jr. of Mays Landing told her friend that Petrosh had been one of the mob who broke into the Capitol building," reported McCaffrey Blauner. "Her friend then repeated the gossip to her grandchild. In turn, the grandchild turned the information over to the FBI, authorities say."