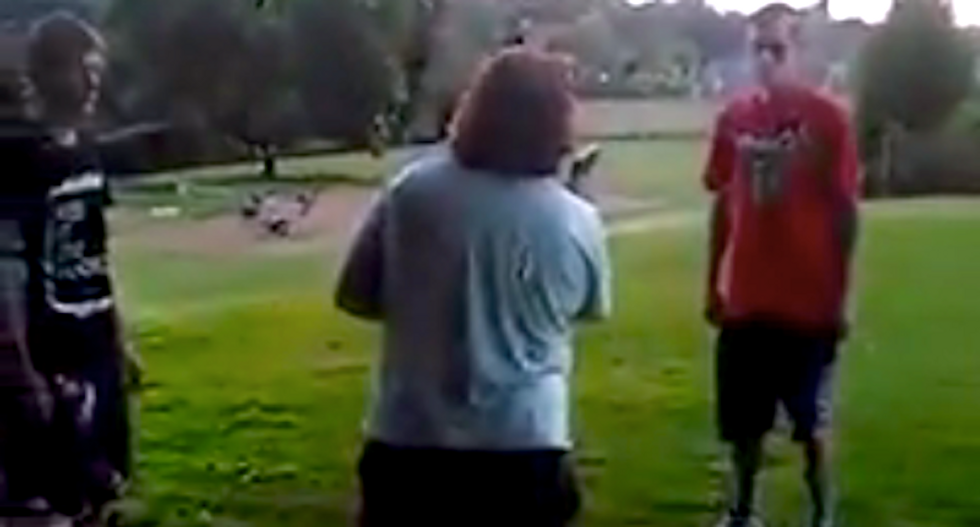 A white Missouri woman pulled a gun on two black teens and a white teenager after she and her husband brought baseball bats to a park where their son was involved in a confrontation.

Don and Tracy Leeser claimed they were defending themselves and their 15-year-old son last week in an incident captured on video, reported the St. Louis Post-Dispatch.

"Get the f*ck away from my kid, you motherf*cker," Tracy Leeser says as she approaches the three teenagers at Fleet Park in St. Charles, a suburb of St. Louis.

The 42-year-old woman exchanges words with the teens before pulling a handgun from her shorts about 55 seconds into the confrontation.

One of the teens dares Leeser to shoot him and taunts her by saying, "keep pointing that sh*t at me," and she turns and points the gun at one of the other teens, who says, "Don't point that godd*mn gun at me."

One of the teens, 15-year-old Tyrelle Ware, posted the video on his Facebook page, but Leeser said she used the gun because she was afraid and needed to protect herself.

“Did I intend to use the gun? Absolutely not, but I felt that was my only safeguard against being killed that night,” Leeser said, but then quickly reversed herself. “Worst-case scenario, yes, I would have used it. But I didn’t.”

Leeser and her husband got involved Wednesday in a feud between their son and the other teens, who they claim became angry after Don Leeser broke up a fight between some girls who are friends with Ware and his 18-year-old brother, Terrence Ware -- who appear to be black or biracial.

Don Leeser pulled out a pocketknife during the scuffle, swung the blade at Terrence Ware and briefly chased him at knifepoint.

The 42-year-old Leeser said he drew the knife because he thought Terrence Ware reached for something in his pocket, but the teen says he did not have a weapon at the time.

Later that evening, Don Leeser said his son sent him a text message claiming he was about to be attacked at the park, so the couple grabbed baseball bats and pistols and went to assist the boy.

The video begins recording as the couple arrived, bats in hand.

Police have not made any arrests so far in the incident, but the Wares' mother said both of the Leesers should be charged.

“If they don’t get charged, what kind of example are we setting for our children — that’s it’s OK to pull guns on kids?” said Christina Halton. “No, this is not how we deal with kids.”

The Leesers claim someone fired a dozen BBs into their front window Sunday morning, when their 8-year-old daughter was sleeping on a couch nearby.

The Ware brothers and their friend, Jack Herren, who was also shown in the video, denied shooting at the window and said they don't know who did.

Police are investigating that incident, as well, but Don Leeser said he's willing to take matters into his own hands.

“I will do what I have to do to protect my family,” Leeser said. “I will let the law try to do their job first, but I’m not going to let my wife and kids get hurt.”