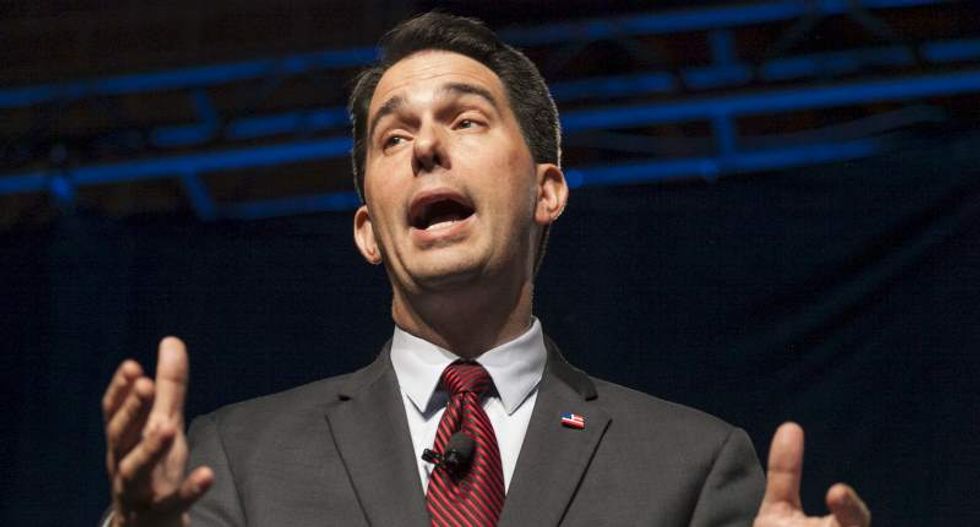 Republican Governor Scott Walker of Wisconsin abruptly pulled out of the 2016 U.S. presidential race on Monday, doomed by a lightning-quick collapse from serious contender to a candidate struggling to raise money and his profile.

Walker, reading a statement in the Wisconsin capital of Madison, decried the negative tone of the Republican campaign in remarks seemingly directed at New York billionaire Donald Trump.

He called on some of his rivals for the Republican nomination to join him in exiting the race to give voters a chance to rally around a front-runner that can win the November 2016 presidential election.

Walker harked back to the late Republican President Ronald Reagan as a model for the party because "he was an optimist."

"Sadly the debate taking place in the Republican Party today is not focused on that optimistic view of America. Instead it has drifted into personal attacks," he said.

"In the end I believe that the voters want to be for something and not against someone. Instead of talking about how bad things are, we want to hear how they can make them better for everyone. We need to get back to the basics of our party," he said.

Walker's fall was dramatic and swift. He electrified conservatives in Iowa in January by promoting his record in Wisconsin of having beaten back public unions and survived a recall election.

When he officially announced his campaign in early July, he was among the leaders for the Republican nomination. But the 47-year-old governor quickly struggled on the campaign trail despite a strong conservative record and a warm personal story as a Harley motorcycle aficionado.

Walker's lack of experience on the national stage was apparent. He gave shifting answers to questions about illegal immigration and once suggested a wall between the United States and close ally Canada might be in order, in an apparent effort to double down on rivals' calls for a wall on the Mexican border.

He did not do much to reassure supporters with lackluster performances in the first two Republican presidential debates.

Walker's struggle for traction, combined with the rise of Trump, took its toll. A CNN/ORC poll released on Sunday gave him less than 1 percent support among Republican voters. In a recent Reuters/Ipsos poll of the Republican field, he received 3 percent of support.

In an initial sign of trouble, Walker last week canceled events in California and Michigan to concentrate on Iowa, the key early voting state that shares a border with Wisconsin.

In recent days, he had vowed to focus solely on Iowa.

Walker will be the second Republican to drop out of the race. He follows former Texas Governor Rick Perry, who dropped out on Sept. 11.