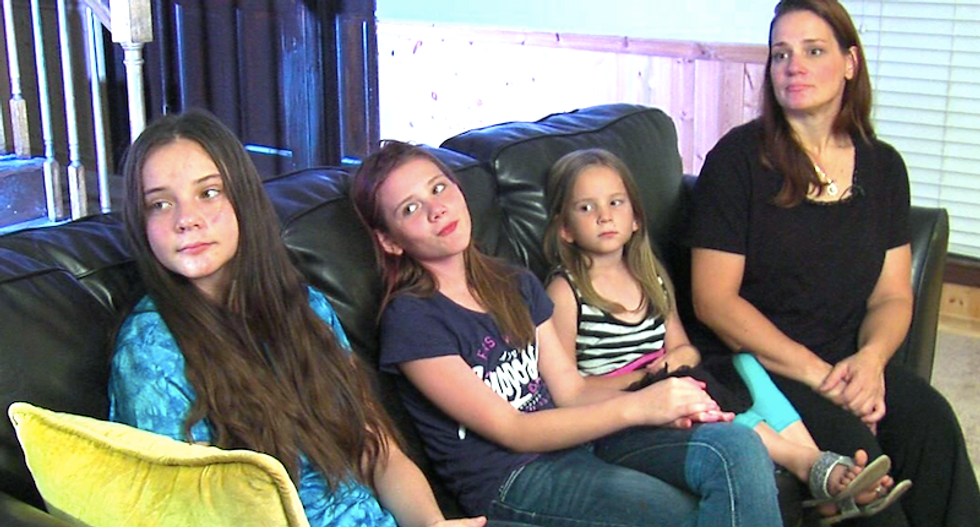 Amy Hawkins and three of her children (WCIV)

A judge granted temporary custody of four children to their mother, who fled with them this summer from her husband and a restrictive religious enclave.

Amy Hawkins waited until her husband left for work one morning in July and broke church rules by downloading Facebook to her phone, which she used to contact her mother-in-law, reported WCIV-TV.

Claudia Owen had not seen her son -- Amy's husband -- in 13 years, and she learned from Hawkins that she had four grandchildren.

Hawkins also said she was leaving her husband and the House of Yahweh enclave near Clyde, Texas, and Owen invited her to come 1,200 miles away to her home in South Carolina.

The 39-year-old Hawkins moved with her husband to West Texas in 2001, when their eldest son was a baby, and lived in a two-bedroom trailer at the 50-acre House of Yahweh compound.

The religious group -- which the cult-monitoring website Religioustolerance.org says meets 10 out of 10 criteria as a dangerous or high-risk organization -- rigorously controls its members' day-to-day life and relationships.

“He’s not the same man, which is very sad,” Owen said of her son, Michael Sherwood. “Because he’s just not there.”

The group's elders named their son Shemuyl, Sherwood took the name Micahyah and the entire family took on the last name Hawkins -- as required of all House of Yahweh members.

“My husband had said this is the place, this is where the truth is," Hawkins recalled. "It's not like any other religion. It was great at first, everything was brand new (and) it's a new place -- you believe it's the place.”

But the rules became stricter, and she said her husband forbade the children from going to school and Shemuyl was forced to work in the church's slaughterhouse.

“It got to the point where I couldn’t teach them anymore,” said Hawkins, who began dating her husband at 22. “I only have a sixth-grade education myself.”

The church has faced legal issues in the past, and founder Yisrayl "Buffalo Bill" Hawkins was sentenced to probation and six months of community service after pleading guilty to child labor violations -- but prosecutors agreed to drop bigamy charges against the sect leader.

A church elder, Yedidiyah Hawkins, was sentenced to 30 years in prison on a 2009 conviction of aggravated sexual assault for using a vaginal speculum on an 11-year-old girl.

Church member Rebekah Hawkins was also convicted of injuring a child in 2007 after she assisted in a surgical procedure on a 7-year-old girl who later died.

Micahyah Hawkins, who filed for divorce and sought custody of the children, said his wife kept the children from going to school or seeing a doctor, and he insists his 15-year-old son loves working at the slaughterhouse and learning a trade.

He also disputed Amy Hawkins' claim that their daughters -- ages 14, 10 and 4 -- would be forced to marry older men from the religious sect.

“I tell my daughters that they’re not getting married until they’re 40,” he testified.

But a judge granted Amy Hawkins custody of the children and allowed her to take them back to South Carolina, where they will all live with Owen.

She said the children are happy to be attending school, but she said they all suffer from anxiety and other psychological problems that will require counseling to help overcome.

“The first week I left I was afraid I was going to get struck by lightning, just because,, and when I ate at a restaurant for the first time in 15 years I thought I was going to die," Amy Hawkins said.

But she and Owen both said the children do not want to return to the House of Yahweh compound.

“I ask them if they want to go back, and they do not want to go back because they’ve seen what it’s like to have a life to live,” Owen said. “They’re getting a peek at normal.”