'You ain't nothing to me, n****r': Black farmer threatened with lynching after dispute over a cow 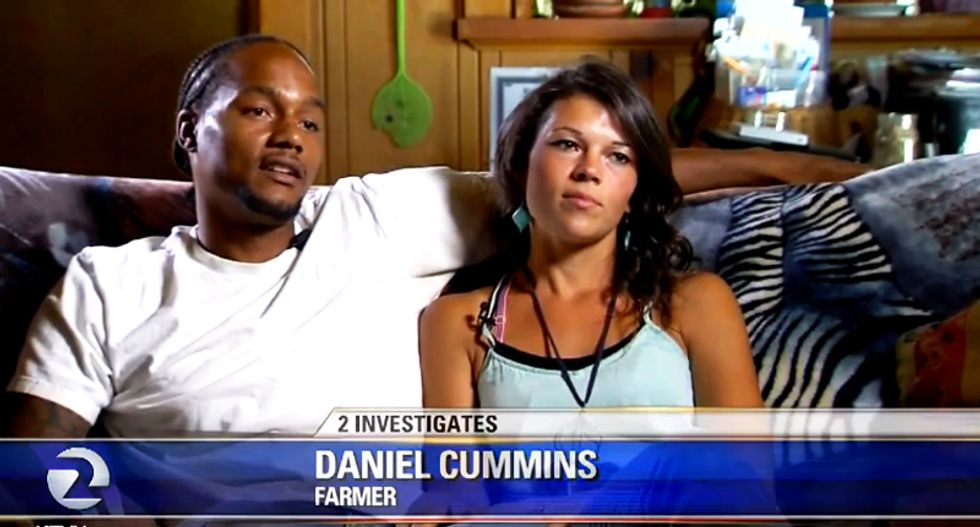 A black farmer, his Native-American wife and their children have become the targets of threats by racists in his community after his white neighbors complained that he stole a cow from them, reports KTVU.

Daniel Cummins and his wife, Ashley Hathaway have worked their farm in tiny Clearlake, Ca. since 2009 without incident, but a recent dispute with neighboring farmers over a who owned a recently born calf  escalated into harassment from the neighbor's nephew and white supremacists vowing to "bury" his children.

According to Cummins, he had agreed to sell the calf to his neighbors, Chris and Tina Rhodes,  but the final sale was never consummated. After Cummins got into a physical altercation with Chris Rhodes, the farmer posted pictures of his injuries and of Cummins at a pizza joint they own in the overwhelmingly white community, calling Cummins a cow thief.

The harassment started with Rhodes' nephew Josh yelling racist epithets and threats over the fence at Cummins and his wife who recorded them.

The threats were not limited to coming from the Rhodes family.

"I think it got serious when I had people come to the gate, identify themselves as white supremacists and then tell me that my family was marked and they were going to bury my children," explained Cummins.

According to Tina Rhodes, Cummins is "a straight up cow thief. And cow thieves in Texas used to get hung."

Pressed on her comments,  Rhodes backtracked saying: "Well, I didn't want him hung, I just wanted our cow back."

Concerns grew when a school administrator noticed unidentified people hanging around the school  Cummins' 8-year-old daughter attends, with one person telling the girl she is "a whore" and calling his family -- including 3-year-old son Zion -- "parasites."

While a restraining order against Rhodes' nephew has been granted, law enforcement has been slow to do anything to protect the family, saying it is hard to identify who is harassing them. Police admit they were unaware of the threats despite the fact they read into court records when the two parties went to court over the cow.

According to KTVU, things have settled down in the community after they spent weeks questioning neighbors and broadcasting about the dispute.

Watch the video below from KTVU: