9/11 suspect seeks to represent himself in Guantanamo hearing 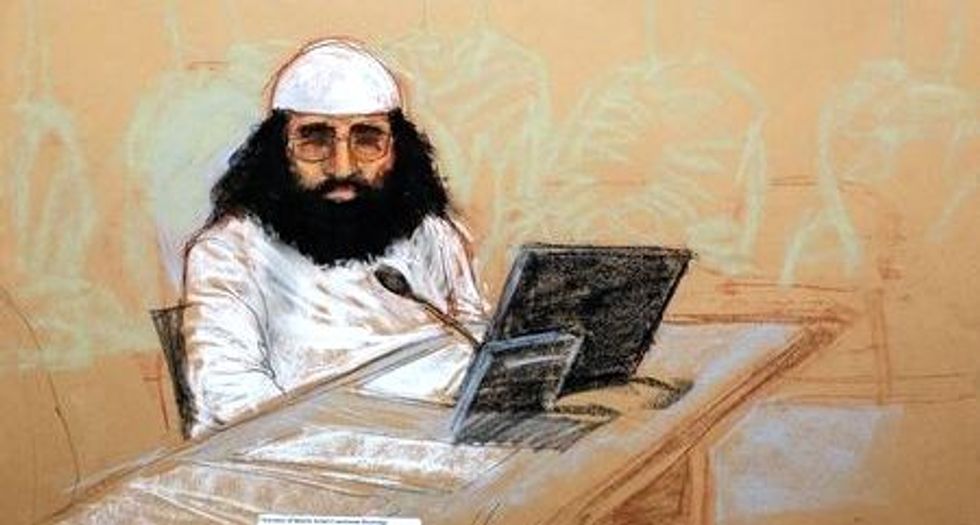 Walid Bin Attash, also spelled Waleed bin Attash, appears at his arraignment as an accused 9/11 co-conspirator in this courtroom sketch reviewed and approved for release by a U.S. military security official, at Guantanamo Bay Navy Base, Cuba, May 5, 2012. REUTERS/Janet Hamlin/Pool

A pre-trial hearing for five Guantanamo Bay 9/11 suspects stalled on Monday when one of them asked how to represent himself in the death penalty case.

Walid bin Attash, a Yemeni accused of running an al Qaeda camp in Afghanistan, told his attorneys that he no longer trusted them and asked the court how he might represent himself.

“We have so many problems in the camp that take precedence over anything we are discussing here in the court,” bin Attash said through an interpreter before the judge, Army Colonel James Pohl, silenced him due to security concerns.

After speaking to him in private, Bin Attash's lawyer, Cheryl Bormann, said: “He feels like he has no relief from the torture and that everything is orchestrated by the United States government here.”

Pohl is awaiting more information from government attorneys before ruling on bin Attash’s request. Proceedings are scheduled to resume on Tuesday.

Bormann has complained about violations of attorney-client privilege at the prison in Cuba. She has cited bugged meeting rooms and an episode when guards seized legal documents from bin Attash’s cell.

Almost 3,000 people were killed when hijackers slammed airliners into New York's World Trade Center, the Pentagon and a Pennsylvania field on Sept. 11, 2001.

Pre-trial hearings for bin Attash and his accused co-conspirators have been derailed since last year, when defense lawyers learned the Federal Bureau of Investigation was monitoring them.

Jim Harrington, an attorney for suspect Ramzi Bin al Shibh, revealed in April 2014 that the FBI had questioned a member of his defense team. Court proceedings were postponed pending an investigation.

The results of the investigation were slated to be discussed on Monday, including whether Harrington will continue to represent Bin al Shibh.

The hearing was held at the Guantanamo Bay U.S. Naval Base prison in Cuba. It was monitored over closed-circuit television at a press room at Fort Meade, outside Washington.