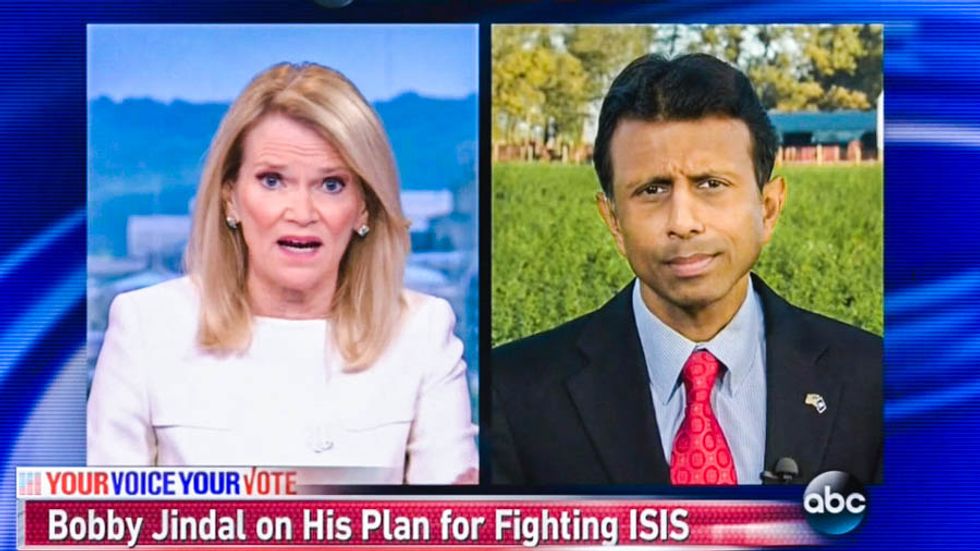 Republican presidential candidate Bobby Jindal said over the weekend that he had a plan to defeat ISIS using "no-fly zones" even though ABC's Martha Raddatz reminded him that the radical Islamic group did not have any airplanes.

In an interview on Sunday, Raddatz noted that Jindal had backed a plan to train Syrian rebels to fight ISIS.

"That has been a complete failure," she explained. "The Obama administration said, essentially, that it wasn't working."

"The reality is that they've dithered, they've waited so long that we've got fewer good options," Jindal opined. "If they'd have aggressively trained those rebels in the beginning, if they had armed and trained the Kurds, we'd be in a different place."

"But how do you train rebels who are there to fight [Syrian President Bashar al-Assad] to suddenly want to fight ISIS?" Raddatz asked. "That's the main problem with those Syrian rebels."

Jindal asserted that the U.S. should be arming the Kurds instead of the Syrian rebels. And secondly, the Louisiana governor called for the U.S. to "create a no-fly zone working with our Turkish and other allies."

"Let's talk about a no-fly zone," Raddatz interrupted. "ISIS doesn't have aircraft. So what would that no-fly zone really accomplish? When has it really worked?"

According to Jindal, a no-fly zone would "stabilize the region so you don't have all these refugees flooding into Europe and trying to leave the country."

Jindal said that it would also prevent Russia from bombing Syrian rebels and would show "our Sunni allies in the region that we're serious about winning this."

"These are radical Islamic terrorists that are burning people alive, crucifying, killing Christians and other religious minorities," Jindal remarked. "We have to hunt them down and kill them before they attack us here."

"You don't think that's what they're doing now?" Raddatz shot back. "We've had thousands and thousands of airstrikes. ISIS is not a traditional army. The reason -- and I've been out on an aircraft carrier, I have seen those jets coming back with their bombs still attached. Because they can't drop bombs in congested areas. They can't risk killing innocent civilians in those areas."