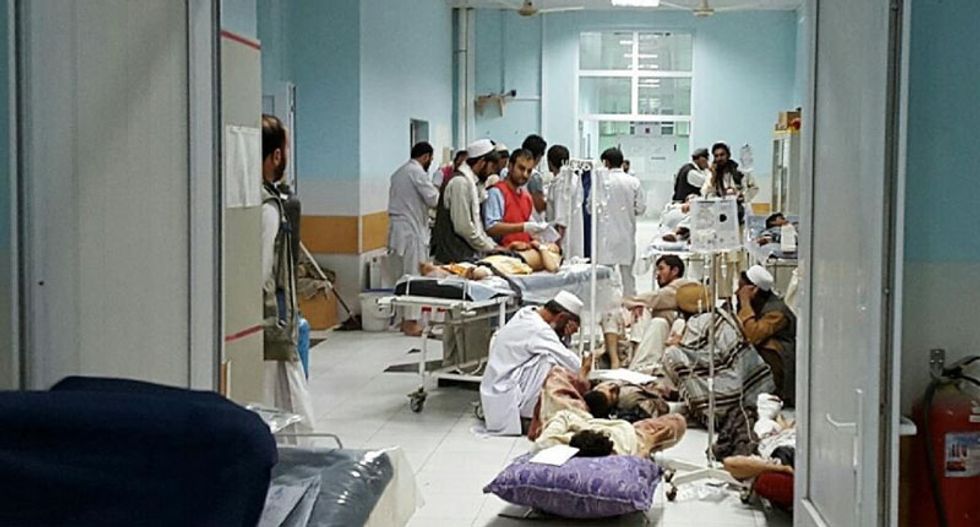 Afghan forces called in a US air strike on a Kunduz hospital that killed 22 people, the top American commander in Afghanistan said Monday, after medical charity MSF branded the incident a war crime.

General John Campbell's statement marks the first US military acknowledgement it was behind Saturday's devastating raid in the northern Afghan city which triggered international outrage.

But his remarks prompted Doctors Without Borders (MSF) to blast the "discrepancies" in US accounts of the strike, which caused patients to burn to death in their beds and reduced the hospital to smouldering rubble.

"We have now learned that on October 3, Afghan forces advised that they were taking fire from enemy positions and asked for air support from US air forces," Campbell told reporters.

"An air strike was then called to eliminate the Taliban threat and several civilians were accidentally struck."

His statement was at odds with previous US military claims that the strike was carried out to protect American special forces on the ground from enemy fire.

There was no immediate reaction from Afghan officials. But they have previously claimed that insurgents were using the hospital as a position to target soldiers and civilians.

Washington is under growing pressure to come clean over the strike, which occurred days after the Taliban overran Kunduz in their most spectacular victory in 14 years.

It has also renewed concerns about the use of US air strikes in Afghanistan, a deeply contentious issue in the 14-year campaign against Taliban insurgents.

MSF, which has closed its trauma centre seen as a lifeline in the war-battered region, accused Campbell of passing the buck to the Afghan government.

"The reality is, the US dropped those bombs. The US hit a huge hospital full of wounded patients and MSF staff," MSF general director Christopher Stokes said.

"With such constant discrepancies in the US and Afghan accounts of what happened, the need for a full transparent independent investigation is ever more critical."

The group said Afghan and coalition troops were fully aware of the exact location of the hospital, having been given GPS coordinates of the facility, which had been providing care for four years.

The main building housing the intensive care unit and emergency rooms was "repeatedly, very precisely" hit almost every 15 minutes for more than an hour, MSF said.

Stokes earlier also hit out at claims by Afghan officials that militants were inside the hospital.

"These statements imply that Afghan and US forces working together decided to raze to the ground a fully functioning hospital with more than 180 staff and patients inside because they claim that members of the Taliban were present," he said.

"This amounts to an admission of a war crime."

US Defense Secretary Ashton Carter expressed sadness over the "tragic loss of life" and repeated President Barack Obama's promise of a full and transparent investigation.

Stokes stressed the need for an independent probe, saying "an internal investigation by a party to the conflict would be wholly insufficient."

He promised a thorough and transparent investigation and pledged "if errors were committed we will acknowledge them."

UN rights chief Zeid Ra'ad Al Hussein has also called for the incident to be "promptly, thoroughly and independently investigated," noting that "an air strike on a hospital may amount to a war crime."

But a spokesman for UN Secretary-General Ban Ki-moon noted it was "still early days."

"We are looking for a credible and transparent investigation. That's all we can say today," said the spokesman, Stephane Dujarric.

The air raid came five days after Taliban fighters seized control of the strategic northern city of Kunduz, in their biggest success since being toppled by a US-led coalition in 2001.

Residents told AFP that clashes in the city appeared to have subsided.

Afghan forces, backed up by their NATO allies, claim to have wrestled back control of Kunduz, where decomposing bodies still littered the streets.

At least 60 people have died and 400 have been wounded in the past week's fighting.

Saturday's raid left the hospital's main building completely gutted. Some of the bodies of those trapped inside were charred beyond recognition.

The dead included 12 MSF staff and 10 patients, among them three children.

MSF's withdrawal from Kunduz comes as the region grapples with a humanitarian crisis, with food and medicine shortages affecting thousands of civilians caught in the crossfire between government forces and insurgents.

The hospital was the only medical facility in the whole northeastern region of Afghanistan that can deal with major war injuries.