Are guns welcome at Trump hotels? Depends on whom you ask 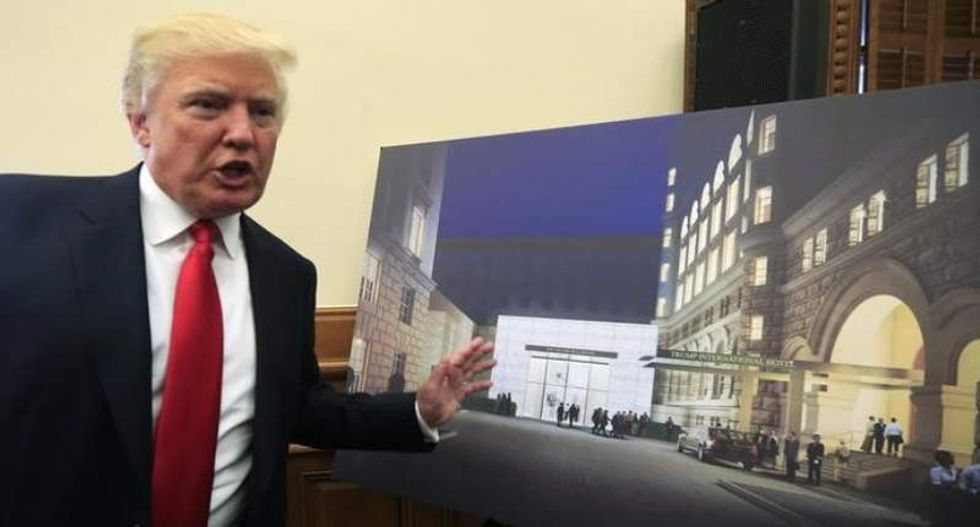 real-estate mogul Donald Trump gestures next to an architectural rendering of The Trump Organization's $200 million redevelopment of the iconic Old Post Office building into a luxury hotel, in Washington Sept. 10, 2013. Photo by Kevin Lamarque for Reuters.

For those wondering whether they can bring their guns with them to the Trump-branded hotels and golf courses that dot the United States' classier corners, Donald Trump may have only added to their uncertainty during Wednesday's Republican debate.

The billionaire real-estate developer and presidential contender indicated he thought guns were not generally allowed, but should be. Several resorts bearing his name, however, have told news outlets guns are absolutely unwelcome, even for guests with permits.

On Thursday Trump's company, the Trump Organization, only added to the confusion by saying guns were already allowed.

The question, and its contradictory answers, came to the fore in Wednesday's debate among Republicans seeking their party's nomination for the November 2016 election during a discussion about gun control and the country's high rate of mass shootings, a highly divisive topic in U.S. politics.

Trump, who has spent months as the Republican favorite in polls, was in the middle of saying that gun-free zones in schools and elsewhere are a "catastrophe" that only make it easier for shootings to happen when a moderator asked him about his properties.

"We called a few Trump resorts," said moderator Carl Quintanilla, "that do not allow guns with or without a permit. Would you change those policies?"

But the Trump Organization said there was nothing to change: guns are already allowed at Trump properties, even if the boss and some resorts appear unaware of this.

"While laws vary substantially from jurisdiction to jurisdiction," the company said in a statement, "we allow security personnel and other licensed individuals the ability to carry a firearm in an effort to protect themselves, our guests, associates and the general public." The firm, based in New York City, is opposed to gun-free zones, the statement said.

It declined to say why Trump and some of his hotels seemed unaware of this policy. Spokeswomen for Trump, who has been attacked by his Republican rivals who accuse him of being a less-than-serious candidate, did not respond to requests for comment.

Trump-stamped hotels and golf courses across the country appeared reluctant to discuss whether they agree with Trump's argument that more guns will increase safety.

Reuters contacted the general managers at nearly 20 Trump resorts. Most did not respond to messages, while a couple of managers simply expressed irritation at the inquiry and hung up.