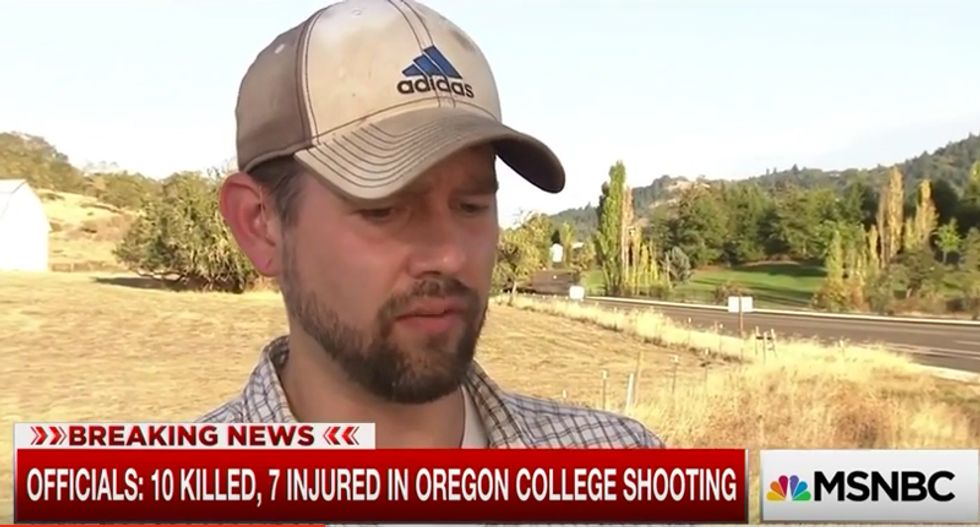 A veteran who says he was carrying a concealed weapon on Oregon's Umpqua Community College campus Thursday when 26-year-old Christopher Harper Mercer went on a murderous rampage, says he didn't intervene because he knew police SWAT team members wouldn't know him from the shooter.

In an interview with MSNBC, veteran John Parker said he knows lots of students who conceal carry at the school because, despite a school policy that discourages weapons on campus, Oregon state law does allow it.

Saying he does conceal carry in case "I'm in close proximity" to an incident where he might try to save some lives, Parker admitted he's not the type who believes that "there's always somebody out there behind your back ready to do something like this."

Conservative commentators -- none of whom were caught up in the panic and confusion at the college campus -- have complained that the school's "gun-free" designation drew the shooter there and that a "good guy with a gun" could have stopped him.

Parker explained that his military training provided him with the skills to "go into danger," but said he felt lucky he and others didn't try to get involved going after Mercer.

"Luckily we made the choice not to get involved," he explained. "We were quite a distance away from the building where this was happening. And we could have opened ourselves up to be potential targets ourselves, and not knowing where SWAT was, their response time, they wouldn't know who we were. And if we had our guns ready to shoot, they could think that we were bad guys."

Parker noted that he was hustled into a classroom with other students by a professor who asked if anyone was armed. He said he raised his hand and said he would attempt to protect his fellow students if they came under attack.

Watch the video below uploaded to YouTube by Think Progress: