As Mike Huckabee's comments and actions get crazier, his campaign fundraising dries up 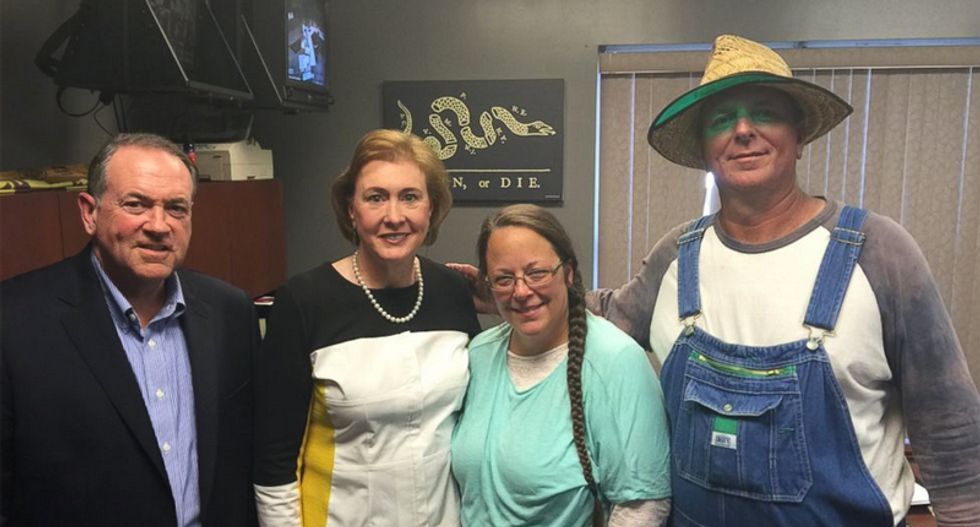 Unlike many GOP presidential candidates who have had difficulty getting any traction at all as billionaire businessman Donald Trump hogs the national spotlight, former Arkansas Gov. Mike Huckabee has had no problem drawing attention by making a series of outrageous comments and attaching himself to anti-gay Kentucky County clerk Kim Davis.

While his actions and comments have garnered him headlines, campaign contributions have dried up for Huckabee as the smart money goes looking for viable candidates who show more of a pulse in the polls.

According to The Hill, Huckabee reported a paltry $1.24 million in contributions for the last reporting period -- the lowest of any candidate who appeared on the prime time GOP debates and not the so-called "kid's table" undercard.

For comparison's sake, the campaign of Democratic presidential hopeful Sen. Bernie Sanders (VT-I) reported a $1.4 million haul in less than eight hours after the Democratic debate earlier this week.

Huckabee's  latest fundraising figures show that the ultra conservative candidate spent about $100,000 more than he brought in, leaving him with $761,000 on hand, far less than he needs to mount any type of viable challenge.

According to GOP strategist Ford O’Connell, “Donors want to back the winner and it’s becoming completely clear who the winners are likely to be.”

That doesn't appear to be Huckabee who currently sits in seventh place with 3 percent of the vote according to the Real Clear Politics polling average.

Huckabee's numbers in must-win Iowa also place him in seventh place -- a poor showing for a conservative Christian in a state with a strong evangelical base.

“It’s horrible for Huckabee…if he doesn’t win Iowa he is dead in the water,” O’Connell explained.

The past few months for Huckabee have been tumultuous due to his association to television's Duggar family and their disgraced son Josh who admitted to molesting several of his sisters as a teen.  Huckabee also strongly embraced Rowan County Clerk Kim Davis whose refusal to do her job and issue marriage license to same-sex couple saw her jailed by a Republican judge.

In recent days Huckabee posted a racist tweet on Twitter -- comparing Asians to dog eaters -- and agreed that jailhouse prisoners should be sold as slaves to pay off their debts.

Huckabee has also pressed the notion that the Supreme Court is not the final arbiter of our nation's laws, saying the President should obey the "Supreme Being" instead.

The Arkansas Republican even took time out to play the Nazi card, saying President Obama's deal with Iran would "take the Israelis and march them to the door of the oven," a comment that was widely criticized, including by the Israeli government.