At Ankara morgue, anger mixes with horror over attack on peace parade 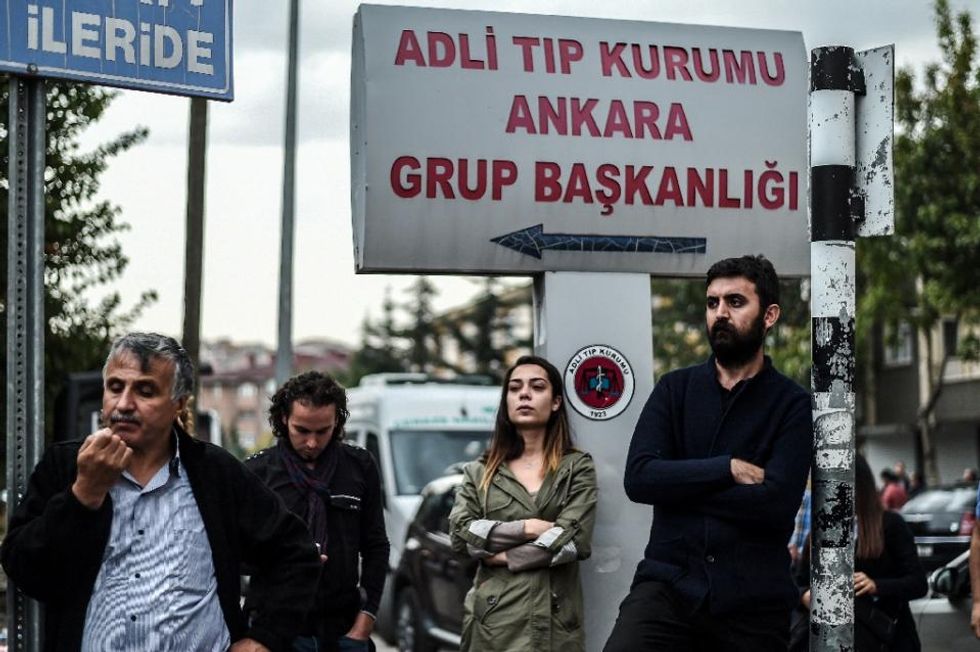 Image: An area allocated for families outside of a forensic morgue, as people wait for the body of a relative, on October 11, 2015 in Ankara (AFP Photo/Ozan Kose)

They came from all over Turkey to recover on Sunday what remained of their loved ones.

Gathered inside a morgue in Ankara, the families of the victims of the double suspected suicide bombing attack on Saturday struggled to come to terms with their loss and the manner in which it happened.

At least 95 people were killed in the attack targeting a major peace rally planned for Saturday in Ankara, which had attracted activists from all over the country. The gathering never took place.

The families waited, sheltered by tent coverings from a light rain, seated on carpets. Hundreds of men and women of all ages in tears, waited for whatever remains of their loved ones would be given back to them.

When the vehicles carrying the coffins approached, the crowd applauded, but timidly. Some started to ululate but stopped short.

"This is not really a place for flags or slogans," said a young woman, 23, who asked to remain anonymous.

Her eyes filled with tears and she expressed bewilderment that the attack had taken place in the heart of the Turkish capital, which had never before seen violence on anything like this scale.

"In the southeast of Turkey we are used to deaths, to martyrs, but not here," she said.

"This time, almost 100 people were killed right in the middle of the capital city. You understand this?"

The activists who had come to attend the rally in Ankara on Saturday were from different groups -- some labour, some leftist, some Kurdish.

But all wanted to promote peace, under the banner "labour, peace, democracy."

"Everyone came here to defend peace," said Umit, his voice quivering after his sister died in the attack.

He complained that given the relatives' agony, the process of reclaiming the corpses had been too slow.

"We have not been able to recover the bodies!" he said.

Safiye, in his 50s, said he is still haunted by the sheer horror of the moment of the twin blasts.

"I saw arms flying above my head, in front of me and behind me. There were corpses, corpses everywhere," he said.

For Mahomet, it was simply "the apocalypse". The young man recounted with a calm detachment the horror he had seen.

"It was worse than war. It's possible to escape war. Here you could not, it was inhuman."

Behind the shock and the agony, anger is never far away.

Many of the victims were supporters of the opposition pro-Kurdish Peoples' Democratic Party (HDP). Their relatives were bitterly critical of the government, which they accuse of not doing enough to protect the demonstration.

"Those who do not believe in brotherhood, those who don't believe in equality of the people of this country are the ones who provoked what we saw yesterday in Ankara," said Havva.

"This is what they did in Ankara, a city now swathed in blood."