At least 86 dead in attack on Ankara peace rally 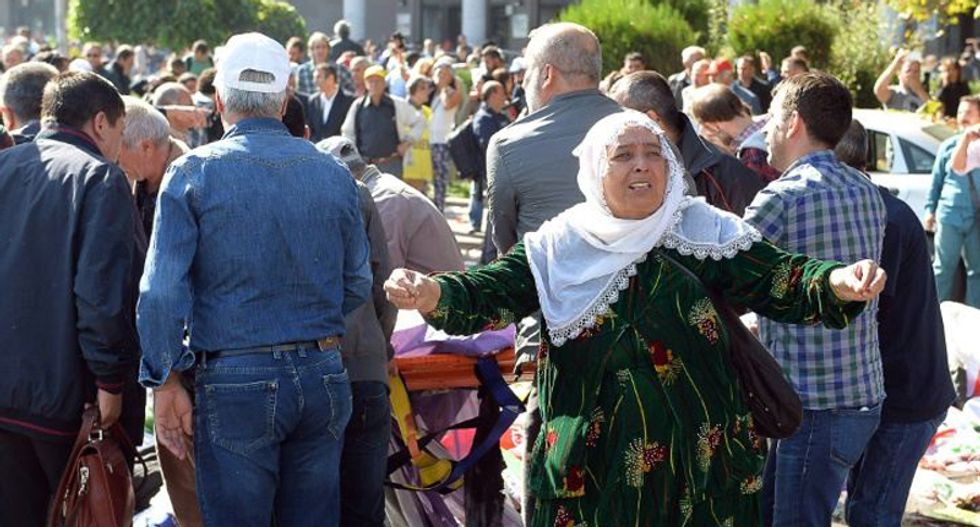 At least 86 people were killed Saturday when two explosions ripped through groups of leftist and pro-Kurdish activists gathering for an anti-government peace rally in the Turkish capital Ankara.

The attack, near Ankara's main train station, was the deadliest in the city's history and has ratcheted up tensions ahead of Turkey's November 1 snap elections, which were already riding high amid the government's offensive on Kurdish militants.

Bodies of the slain activists were seen strewn across the ground after the blasts, with the banners they had been holding lying next to them for the "Work, Peace and Democracy" rally.

Sixty-two people died at the scene of the blasts and 24 more then succumbed to their wounds in hospital, Health Minister Mehmet Muezzinoglu told reporters in Ankara. He said another 186 people had been injured in the attack.

Turkey's President Recep Tayyip Erdogan denounced the "heinous attack", saying it was aimed at "our unity and our country's peace."

A Turkish government official told AFP that the authorities "suspect that there is a terrorist connection," without giving further details. Reports said they were investigating if a suicide bomber was involved.

There were scenes of chaos after the blasts, as ambulances raced to get to the wounded and police cordoned off the area around the train station.

"We heard one huge blast and then one smaller explosion and then there was a great movement and panic. Then we saw corpses around the station," said Ahmet Onen, 52.

"A demonstration that was to promote peace has turned into a massacre, I don't understand this," he said, sobbing.

Turkish police fired in the air to disperse demonstrators angered by the deaths of their fellow activists from the scene, an AFP correspondent reported.

Amateur footage broadcast by NTV television showed smiling activists holding hands and dancing and then suddenly falling to the ground as a huge explosion went off behind them.

Initial reports spoke of a single explosion but Turkish media said later there had been two separate blasts in short sequence.

Reports said that hundreds of people in Ankara had rushed to hospital to donate blood for the victims.

Turkish Prime Minister Ahmet Davutoglu was hosting a meeting of top officials, including powerful spy chief Hakan Fidan, in the early afternoon to discuss the attack.

The pro-Kurdish Peoples' Democratic Party (HDP) was to have been one of several groups that was to have taken part in the pro-peace protest.

"We are faced with a huge massacre. A barbaric attack has been committed," said the HDP's leader Selahattin Demirtas.

He blamed a "mafia state" and a "state mentality which acts like a serial killer" for the attack.

The attack comes with Turkey on edge ahead of November 1 polls and a wave of unrest over the past few months.

An attack in the predominantly Kurdish town of Suruc on July 20 targeting pro-HDP activists and blamed on Islamic State (IS) jihadists killed 32 people and wounded a hundred others.

The militant Kurdistan Workers' Party (PKK) accused Ankara of collaborating with IS and resumed attacks on the Turkish security forces after observing a two-year ceasefire.

Over 140 members of the security forces have since been killed while Ankara claims to have killed over 1,700 Kurdish militants in weeks of bombardments of PKK targets in southeast Turkey and northern Iraq.

With conspicuous timing, the PKK announced it would suspend all attacks -- except in self defence -- ahead of the polls.

"Heeding calls from Turkey and abroad, our movement has decided on a state of inactivity by our guerillas, unless our people and our guerilla forces are attacked," Kurdistan Communities Union (KCK), an umbrella movement that includes the PKK, said in a statement.

The HDP performed strongly in the last election on June 7, winning 80 seats in parliament to deprive Erdogan's ruling Justice and Development Party (AKP) of an outright majority for the first time since it came to power in 2002.

The AKP then failed to form a coalition in months of talks, prompting Erdogan -- who had been hoping for a large majority to push through reforms to boost his powers -- to call another election on November 1.

The office of Davutoglu said that he had cancelled election campaigning for the next three days.