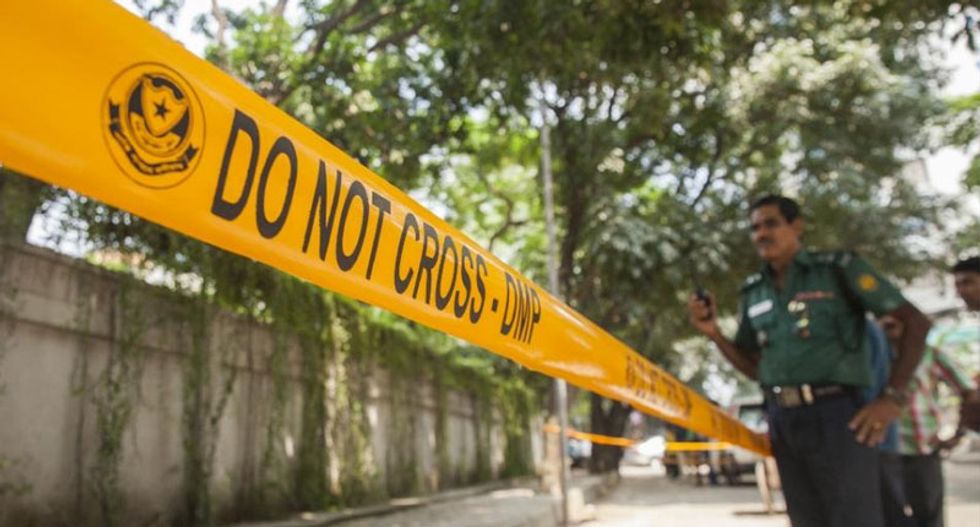 Bangladeshi police officers stand guard at the site where an Italian charity worker was shot to death by attackers, in Dhaka, on September 29, 2015 (AFP Photo/-)

Bangladesh police said Monday they had arrested five Islamists for the attempted murder of a Christian pastor whose throat was slashed in the latest of a string of attacks blamed on religious extremists.

The five members of the outlawed Jamayetul Mujahideen Bangladesh (JMB) group have been detained on suspicion of planning or carrying out last week's attack on Baptist pastor Luke Sarker in the town of Iswardi.

One of those arrested was suspected of having attacked Sarker before making his getaway on the back of a motorbike, while the other four were believed to have been involved in plotting the attack.

"They carried out the attack to draw international attention and destabilise the country," district police chief Alamgir Kabir told AFP.

Sarker, who runs a church in the mainly Muslim northwestern town, was attacked on October 5 while trying to respond to a question about Christianity.

He was rushed to hospital but medical officials say he is now recovering.

The attack came only days after gunmen shot dead an Italian aid worker and a Japanese farmer. The Islamic State organisation has claimed responsibility for both of those killings.

Attacks on Christians, who make up less than one percent of Bangladesh's 160 million people, are rare although 10 people were killed in 2001 when Islamists bombed a church in the southern district of Gopalganj.

Experts say Islamist militants pose a growing danger in Muslim-majority Bangladesh, warning that a long-running political crisis has radicalised opponents of the government.

The assassination of four atheist bloggers since the turn of the year undermines the government's efforts to play down the threat posed by hardliners, experts say.

The JMB killed 28 people in 2005 when they carried out a series of bomb attacks on courts. While its top leaders were subsequently executed for the bombings, police say the JMB is now regrouping.

On Dec. 19, President Donald Trump blasted out a tweet to his 88 million followers, inviting supporters to Washington for a “wild" protest.

Earlier that week, one of his senior advisers had released a 36-page report alleging significant evidence of election fraud that could reverse Joe Biden's victory. “A great report," Trump wrote. “Statistically impossible to have lost the 2020 Election. Big protest in D.C. on January 6th. Be there, will be wild!"