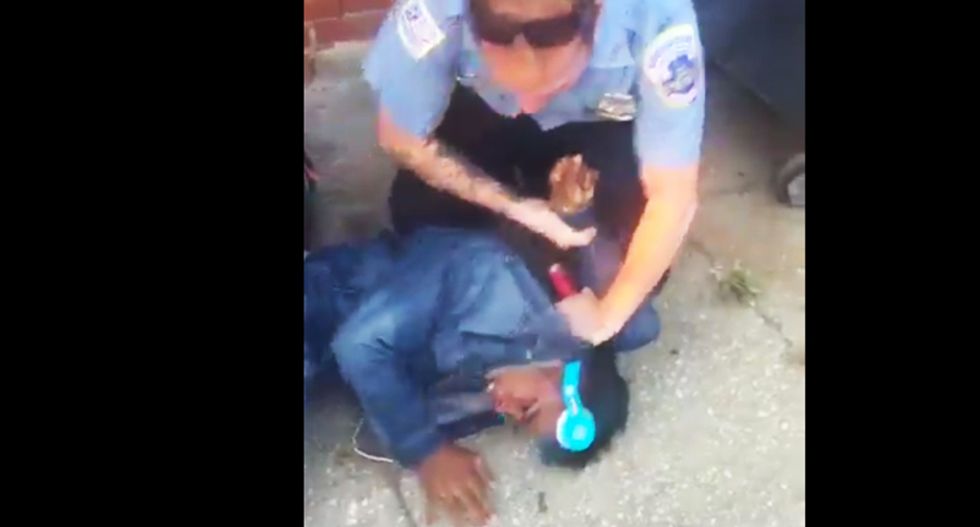 A black man identified by his Twitter name @darealbighomiee claims he and his companion were assaulted and handcuffed by District of Columbia police officers because a white couple said they made them feel "uncomfortable."

According to WJLA, the man and his friend -- both identified as Howard University students -- were hanging out near a bank ATM when they were approached by police officers who were responding to a call stating a "suspicious person" had been spotted and might be trying to rob people.

According the Metro Police report, three individuals were approached and one fled, leading to a chase.

"The individual resisted, and was handcuffed while resisting after he refused to stop," the report stated. "The person making the video was interfering with police, and was also detained while the incident was investigated.'

The report concludes, "Neither individual was arrested."

In the video, two cops can be seen wrestling with 18-year-old Jason Goolsby on the ground, pulling his arms behind his back as he screams, telling him to stop resisting.

Goolsby's companion, who was filming the incident, can be heard repeatedly telling the police, "He didn't do nothing."

After one officer screams at him to back up, a third officer shows up and threatens the cameraman with arrest before a scuffle breaks out and the video stops.

In a later tweet linked to the video, @darealbighomiee wrote: "We were approached because a white couple felt uncomfortable around me and my friend in the bank, this is how the police responded ..."

Twitter users are planning a rally near the bank where the incident occurred, using #justiceforjason as a rallying call.