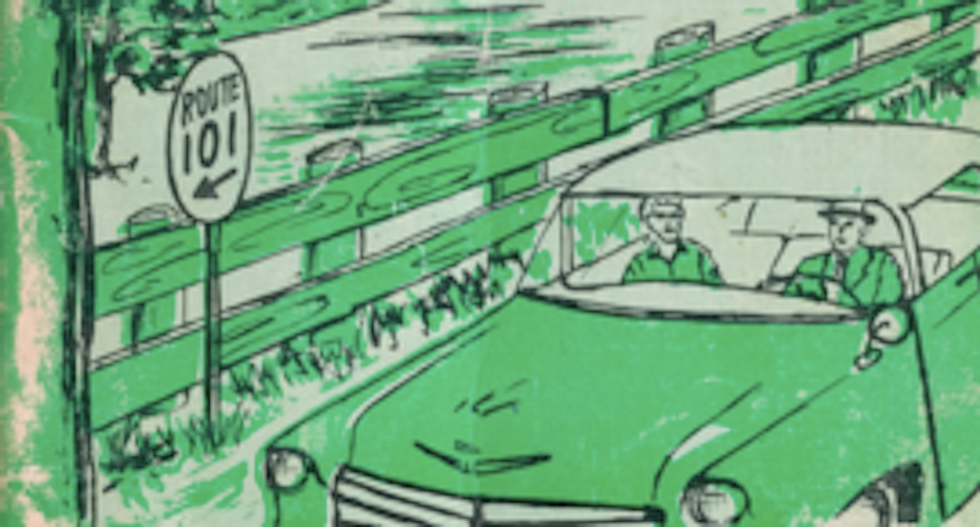 Before the Civil Rights Act was passed in 1964 -- and decades before the Internet and smart phones existed -- black travelers relied on the "Green Book" to find hotels, restaurants and other establishments willing to accept their business.

The travel guide was published between 1936 and 1966 to help black motorists avoid racial harassment, arrest and violence as they traveled through the U.S. during the Jim Crow era.

All but two of those editions -- the inaugural edition in 1936 and the one from 1952 -- have been digitized and posted online by the Schomburg Center for Research in Black Culture, reported DNA Info.

"Carry The Green Book with you. You may need it,” reads the cover of the 1949 edition, followed by a quote from Mark Twain: “Travel is fatal to prejudice.”

Victor Green, a U.S. Postal Service worker, started publishing the books from his New York City Apartment after his wife decided they should scout all the black-friendly businesses on the way to visit her family in Virginia.

"The idea crystallized when, not only himself but several friends and acquaintances complained of the difficulties encountered; oftentimes painful embarrassments suffered which ruined a vacation or business trip," wrote Novera C. Dashiell in the spring 1956 edition.

Green and other mail carriers shared their experiences in racially segregated America, and they helped black travelers avoid "sundown towns," where they weren't welcome after dark, and other racist areas or businesses.

The books were immediately popular, and they serve as a fascinating document of midcentury cultural history.

"Our leaders and educators look forward to the day when as a racial group, we will enjoy the rights and privileges guaranteed us, but as of now withheld in certain areas of these United States," Dashiell wrote in 1956. "In looking ahead ... A trip to the moon? Who knows? It may not be so improbable as it sounds. A New York scientist is already offering for sale pieces of real estate on the moon. When travel of this kind becomes available, you can be sure your Green Book will have the recommended listings!"

The annual guide included hotels, restaurants, barber shops and beauty parlors, night clubs, taverns and auto body shops from every state and parts of Canada before publication was suspended during World War II.

"The white traveler has had no difficulty in getting accommodations, but with the Negro it has been different," reads the introduction to the 1956 edition. "He, before the advent of a Negro travel guide, had to depend on word of mouth, and many times accommodations were not available."

Families listed their own homes open to travelers in towns that lacked black-friendly hotels or eateries, and as the publication became more professional after the war, a variety of writers contributed short essays and travel advice.

“The Negro traveler's inconveniences are many and they are increasing because today so many more are traveling, individually and in groups," wrote contributor Wendell P. Alston in 1949.

Green, who remained publisher until his death in 1960, became more vocal in his support for equal rights.

“There will be a day sometime in the near future when this guide will not have to be published,” Green wrote in 1948.