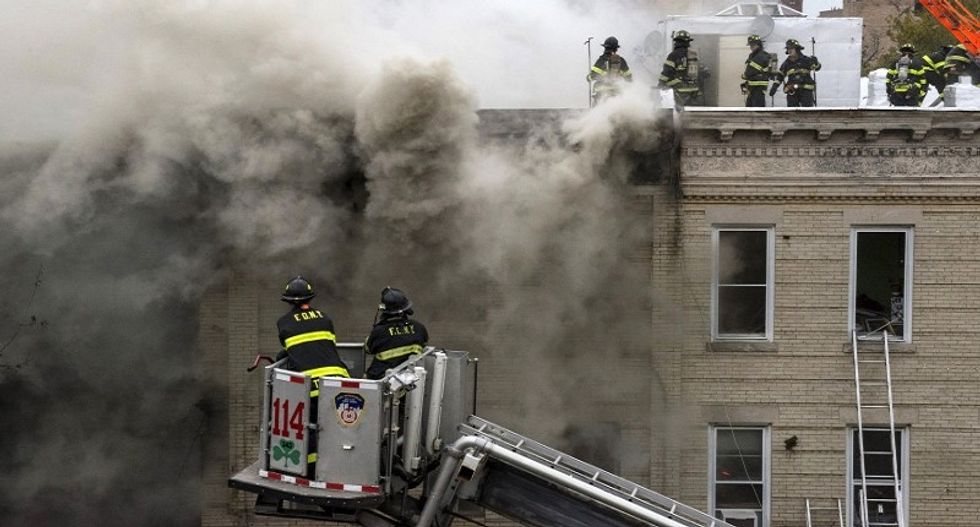 Firefighters respond to an apparent gas explosion and fire in the Brooklyn borough of New York, October 3, 2015. REUTERS/Stephanie Keith

One person was killed and three more were injured in a gas explosion and fire that ripped the facade off of a three-story building in New York on Saturday, fire officials said.

More than 160 firefighters were battling the four-alarm blaze, reported to the New York Fire Department at 1:05 p.m. local time, by late afternoon in the borough of Brooklyn, a spokesman with the department said.

"On behalf of all New Yorkers, my thoughts and prayers are with those who have been impacted by today's explosion, especially the friends and family of those lost or injured," Governor Andrew Cuomo said in a statement.

When first responders arrived on the scene, they found one person dead, the fire spokesman said. All of those injured were transported to local hospitals. One was in critical condition and the remaining two had minor injuries.

National Grid, the gas provider in the area, said it had responded to the incident.

"National Grid ... is working under the direction of the FDNY to shut off the gas and make the situation safe," company spokeswoman Karen Young said in an email.

It was not immediately clear what had caused the incident or whether the building was entirely residential or mixed-use.

Cuomo said he would direct the State Department of Public Service to investigate the blast, which he likened to fatal gas explosions at buildings in Manhattan's East Village and Harlem in recent years.