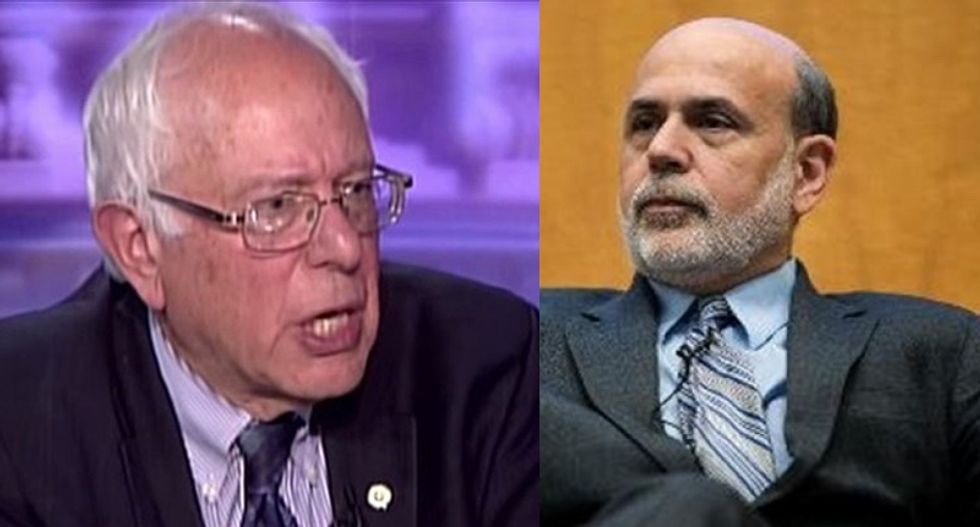 Appearing in an interview with ABC's George Stephanopolous, former Fed Chairman Ben Bernanke was confronted with comments in his new book comparing Democratic presidential nominee Bernie Sanders to a conspiracy theorist for believing that the world is at the mercy of "a vast conspiracy of big corporations and the wealthy."

The former Fed chairman is out promoting his new memoir, 'The Courage to Act," describing his role in the sub-prime financial crisis that saw the Federal Reserve bailing out the "too big to fail" Wall Street banks -- only to see Sanders excoriate him afterwards for failing at his job.

Asked about his reference to the Vermont populist who ripped him on the Senate floor and in committee hearings, Bernanke demurred saying he didn't want to get into "individual politicians."

"I don't want to get into individual politicians..." Bernanke began before being interrupted.

"You write about it in your book, saying he sees conspiracies out there," Stephanopolous offered.

"Well, I think there is a sense in the public, in general, is that anything bad happens, it's because some evil person willed it to happen," Bernanke explained. "And, having been inside government now, I can tell you a lot of bad things happen because people make mistakes or don't make the right choice."

Bernanke may still be smarting from the brutal dressing down Sanders gave him in 2009 (see below), asking why average citizens couldn't get the sweetheart deals Bernanke was handing out to the bankers.

Watch videos of Bernanke with Stephanopolous, and of Sanders grilling Bernanke below: