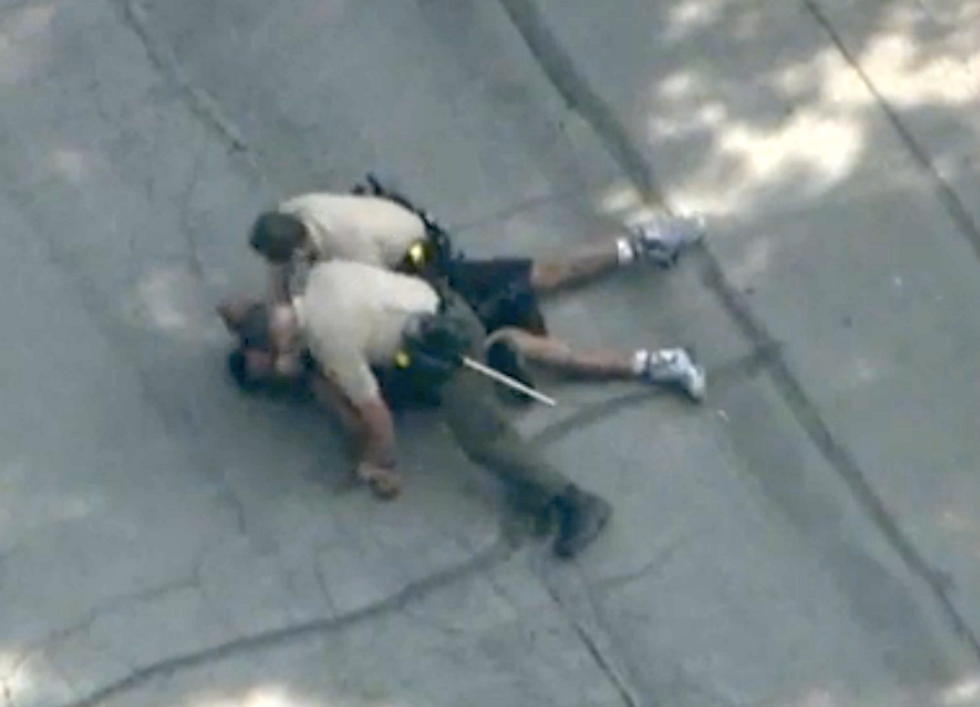 A deputy sheriff in San Bernardino County, California got caught on video repeatedly punching a helpless suspect after a high-speed chase in Southern California on Thursday.

Huffington Post reported that officers had pursued a burglary suspect for 40 minutes from Rancho Cucamonga to Pasadena. One police cruiser collided with a tree during the chase.

Officer Monica Posada with the California Highway Patrol said the chase began around 10:53 a.m. and involved a suspect in a 1996 Lincoln Coupe.

In aerial video captured at the end of the chase by a KTLA news helicopter, a man is seen lying on the ground with his hands behind his back while one deputy holds a pistol on him and a second deputy approaches him, then begins to violently beat him.

The deputy threw at least 15 punches and kneed the suspect -- identified by the L.A. Times as 25-year-old Donovan Gardner -- in the head two times, said KTLA.

"There were two officers and they were pummeling him from each side," said witness Aleta Hancock.

Huffington Post said that by 11:45 a.m., paramedics were seen loading the Gardner -- immobilized on a back board and wearing a neck brace -- into an ambulance.

It is unclear from the video how much Gardner was resisting, if at all.

Use-of-force expert Geoffrey Alpert told the L.A. Times that the arrest was excessively violent, but this is "an example of what happens to officers when they're so angry at the suspect and they lose perspective, and get what we call an adrenaline dump."

The over-the-top violence directed at Gardner, Alpert said, was unacceptable.

"There is no justification for those blows," he said.

At least two other people were arrested in connection with the chase.

The incident comes just six months after a news helicopter caught San Bernardino County Deputies violently attacking another suspect after a car chase into the desert.

A sheriff's department spokesman said there was nothing out of order in deputies' treatment of Gardner.

Sgt. Phill Dupper told KTLA that the car chase "was a violent criminal act by criminals that had no regard for anyone's life."

Watch video of the brutal arrest, embedded below: