Cardinal says liberals and Islamists are the twin 'Beasts of Apocalypse' 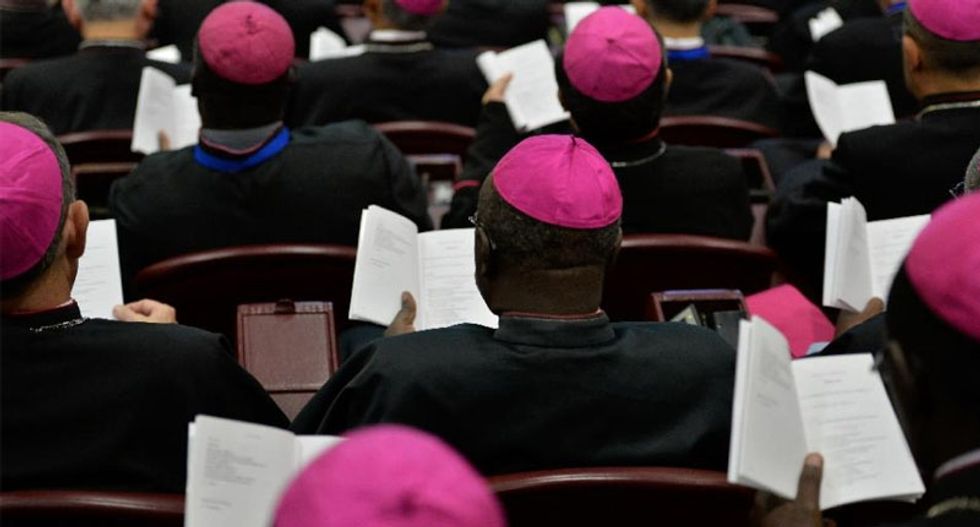 Catholic bishops attend a session of the Synod on the Family at the Vatican, on October 6, 2015 (AFP Photo/Andreas Solaro)

A top African cardinal has described the threat posed by Islamic extremism and western liberal culture as the twin "Beasts of the Apocalypse" comparable to Nazism and communism.

In an intervention at an ongoing synod of bishops on the future of Catholic teaching on the family, Guinean cardinal Robert Sarah reportedly described Islamist militants and western thinking on abortion and homosexuality as sharing "the same demonic origin".

"Theological discernment allows to see in our times two unexpected threats -- almost like the Beasts of the Apocalypse -- from two opposite positions: on one side the idolatry of western freedom, on the other religious fanaticism," said the cardinal, who is one of the leaders of the Church's conservative wing.

"What Nazism-fascism and communism were to the 20th century, western ideologies on homosexuality and abortion and Islamic fanaticism are to today," the cardinal said in comments made last week in the closed-doors synod and published Tuesday by several Italian media outlets.

"On the other side, there is the pseudo-family of an ideological Islam which legitimises polygamy, sexual slavery, child marriage: look at Al-Qaeda, IS, Boko Haram.

"Certain keys allow us to discern the same demonic origin of these two movements: they both advocate a universal and totalitarian law, they're both violently intolerant, destroyers of families and the Church, and openly anti-Christian."

The African cardinal's outburst follows reports earlier this week that another conservative cleric had described "a whiff of Satan" permeating the synod, which has been beset by mutual allegations of plotting as the battle between conservatives and progressives has intensified.

Sarah, who holds the equivalent of a ministerial post at the Vatican, was one of the cardinals who sent Pope Francis a private letter last week complaining that the synod's procedures had been rigged in favour of liberals who support reform of the Church's approach on homosexuality and divorce.

He has also been a prominent opponent of any dilution of Catholic doctrine which means a believer who gets divorced and then remarried in a civil ceremony is effectively excluded from the Church by being denied the right to take communion and confess their sins.