Catholic bishops poised to clash over divorce and gays at synod 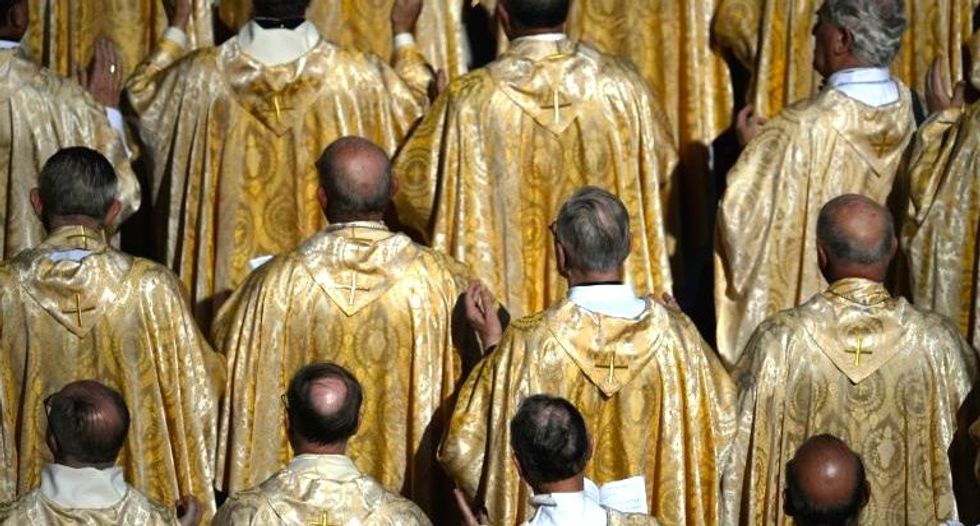 Bishops attend a papal mass for the beatification of Paul VI, who died in 1978, and the end of Vatican's synod on the family at St Peter's square at the Vatican on October 19, 2014

Catholic bishops are congregating in Rome for three weeks of debate on the family that could radically reshape the Church's approach to the divisive issues of divorce and homosexuality.

A second and final round of a review of Church teaching on a broad spectrum of questions related to family life opens on Sunday -- and Vatican officials are being unusually frank in admitting that clashes are inevitable.

"We are at sea, in choppy waters even," said Lorenzo Baldisseri, the cardinal who serves as Secretary General of the synod, as the assembly of bishops is known.

Although battlelines are not always clearcut, the most important division is between reformers who want to make the Church more accommodating towards gay, divorced or cohabiting believers, and those opposed to any dilution of centuries-old doctrine which holds that marriage is for life, full stop, and that homosexuality is sinful or an abomination.

Pope Francis has made it clear he favours a fresh approach and his status as the infallible Vicar of Christ means he can ultimately decide what he likes.

But most Vatican experts agree he will be looking for majority support for any changes.

Last year's first round of discussions made global headlines when early draft conclusions included a passage saying the Church should recognise the value of loving, same-sex relationships -- a groundbreaking formula that had echoes of Francis' own "who am I to judge?" soundbite on the issue.

But a backlash from bishops who claimed they had never been given a chance to discuss the controversial passage ensured it was removed from the final text.

Such a public parading of divisions is unlikely to happen this time around as Francis has decreed that no interim working document will be released during the synod. It is unclear even if a final document will be made public.

At the heart of the synod's agenda is Francis' belief, articulated by the German cardinal and theologian Walter Kasper, that the Church must address the present gulf between what it currently says about marriage, love and sex and what tens of millions of its followers actually do every day.

As Kasper sees it, the Church has to demonstrate mercy rather than condemning believers who find themselves in breach of its teaching.

In response to the conservatives who say this opens the door to a dilution of Church doctrine, he replies: "But mercy is the foundation of the gospel, it is the doctrine of Jesus."

On the other side of the debate, the conservatives see the spread of gay marriage legislation as posing an existential threat to the church's view of family life founded on the love of a man and a woman and their desire to have children.

"So-called homosexual marriage is like a challenge the western world has thrown down to the Church," said one of the leading conservatives, the archbishop of Bologna, Cardinal Carlo Caffarra.

"This world is saying to us: 'Look, I have created a marriage which has nothing to do with your marriage'."

US cardinal Raymond Leo Burke warned Francis to be wary of antagonising those who disagree with him.

"The holy father exercises his power in total obedience to Christ and he cannot go against the truth of Christ," Burke, a once-powerful cardinal who has been sidelined by Francis, told a pre-Synod seminar.

While the debate is often conducted in abstract theological terms, in practice it comes down to a handful of simple questions, the most pressing of which, in terms of the church's rulebook, is whether remarried divorcees should be able to receive communion and confess their sins to a priest.

This has been banned for centuries but has become increasingly untenable as the volume of divorces in Catholic families has grown.

Francis says the Church must tend to the "wounds" caused by family breakdown rather than seeking to exclude or judge the many people within its ranks living in "irregular" situations.

He has personally married couples who had lived together "in sin" prior to their weddings and baptised children born to parents married outside of the church.

And he has already pre-empted one of the issues that was supposed to be resolved by the synod by unilaterally announcing changes which will make it much easier and quicker for failed marriages to be annulled, leaving believers free to remarry and take communion.

All of which tends to indicate that he wants reform to be part of his legacy and, as Baldiserri put it, a key rule of this particular game is that: "The final word will be for the holy father."