Catholic bishops set to resume battle over future of family 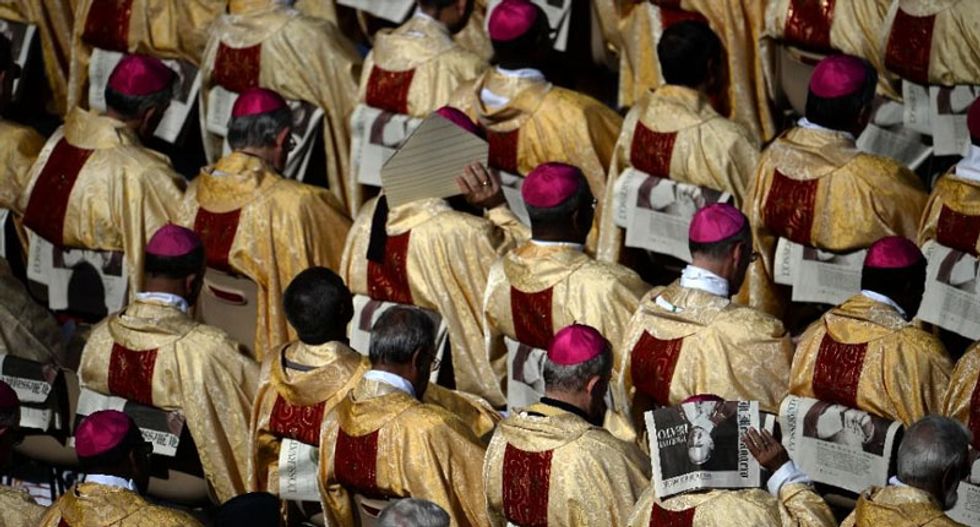 For Catholic bishops, all roads lead to Rome this weekend and a resumption of the battle over the future of Church teaching on the vexed and divisive issues of homosexuality, divorce and cohabitation.

A second and final round of a landmark review of Church teaching on the family begins on Sunday with Pope Francis pushing for reform in the teeth of fierce resistance from conservative clerics fearful of a dilution of long-cherished doctrine on the sanctity of marriage.

The three-week long synod follows a sometimes stormy first meeting this time last year which laid bare the depth of divisions in the Church and, some say, exacerbated a climate of mistrust related to the direction Francis is leading it.

Although ultimately Francis will decide himself if there is any substantial shift in how the Church relates to gay, divorced and cohabiting believers, most observers say the mood and balance of opinion within the synod is likely to influence what he does in the months after it concludes on October 25.

Last year's first round of discussions made global headlines when early draft conclusions included a passage saying the Church should recognise the intrinsic value of loving, same-sex relationships; a groundbreaking formula that had echoes of Francis' own "who am I to judge?" soundbite on the issue.

But a backlash from bishops who claimed they had never been given a chance to discuss the controversial text ensured it was removed from final conclusions.

At the heart of the synod's agenda is Francis' belief, articulated most stridently by the reformist German cardinal and theologian Walter Kasper, that the Church must address the present gulf between what it currently says about marriage, love and sex and what tens of millions of its followers actually do every day.

As Kasper sees it, the Church has to demonstrate mercy rather than preach condemnation to believers who find themselves in breach of its teaching.

In response to the conservatives who say this opens the door to a dilution of Church doctrine, he replies: "But mercy is the foundation of the gospel, it is the doctrine of Jesus."

On the other side of the debate, the conservatives see the institution of marriage, the cornerstone of family life, as being under siege in a world where acceptance of homosexuality has increasingly led to legislation designed to ensure same-sex couples can marry and have children.

"So-called homosexual marriage is like a challenge the western world has thrown down to the Church," said one of the leading conservatives, the archbishop of Bologna, Cardinal Carlo Caffarra. "This world is saying to us: 'look I have created a marriage which has nothing to do with your marriage'."

US cardinal Raymond Leo Burke warned Francis that he would be ill-advised to ignore the strength of feeling in the Church.

"The holy father exercises his power in total obedience to Christ and he cannot go against the truth of Christ," Burke, a once-powerful cardinal who has been sidelined by Francis, told a pre-Synod seminar.

While the debate is often conducted in abstract theological terms, in practice it comes down to a handful of simple questions, the most pressing of which is whether remarried divorcees should be able to receive communion.

This has been banned for centuries but has become increasingly untenable as the volume of divorces in Catholic families has grown.

Critics of the Church's stance say it is cruel as it treats divorced people more harshly than individuals guilty of more serious breaches of the Christian code, such as murder.

Since becoming pontiff two-and-a-half years ago, Francis has consistently urged the Church to tend to the "wounds" caused by family breakdown rather than seeking to exclude or judge the many people within its ranks living in "irregular" situations.

He has personally married couples who had lived together "in sin" prior to their weddings and baptised children born to parents married outside of the church.

And he has already pre-empted one of the issues that was supposed to be resolved by the synod by unilaterally announcing changes which will make it much easier and quicker for failed marriages to be annulled, leaving believers free to remarry and take communion.

In August, he reminded the faithful that divorced people who have remarried "are still part of the Church" and should not be treated as if they have been excommunicated or cast out.