Catholic priest comes out as gay ahead of major bishop's meeting: 'I want to be an advocate for all sexual minorities' 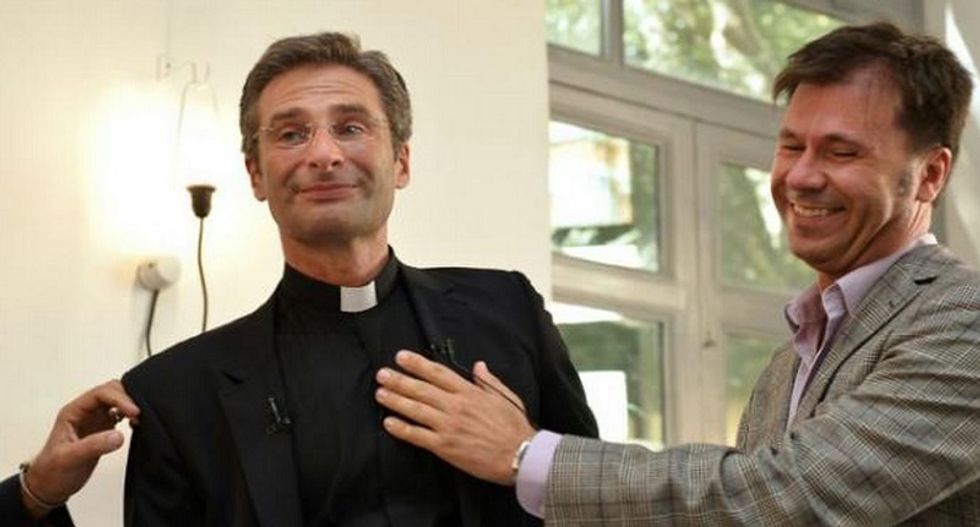 AFP/AFP - Father Krysztof Olaf Charamsa (L), who works for a Vatican office, gives a press conference with his partner Edouard to reveal his homosexuality on October 3, 2015 in Rome

The Vatican reacted furiously on Saturday after a Polish priest employed as a senior official publicly declared his homosexuality on the eve of a bishops' synod set to touch on the divisive issue of the Catholic Church's relationship to gay believers.

In a statement, a Vatican spokesman said Krzystof Charamsa's action had been "very serious and irresponsible", and that the priest would be automatically kicked out of his post as a theologian in the Vatican.

Charamsa, flanked by his Catalan boyfriend Eduardo and wearing his priest's collar, told a news conference in Rome he had been compelled to speak out against what he said was the hypocrisy and paranoia that shapes the Church's attitude to sexual minorities.

While appearing resigned to the fact that his life as a priest is over, he said: "I'm out of the closet and I'm very happy about that."

Visibly moved at times but always smiling, the 43-year-old added in Italian: "I want to be an advocate for all sexual minorities and their families who have suffered in silence."

In an indication that Charamsa had planned the move for some time, he presented a 10-point "liberation manifesto" against "institutionalised homophobia in the Church", which he said particularly oppressed the gay men who, according to him, make up the majority of priests.

He also revealed plans for a book about his 12 years at the heart of a Vatican bureaucracy only just recovering from a scandal under previous pope Benedict XVI over the influence of a "gay lobby" among senior clergy.

"To my Church, I want to say that I reject and I denounce the current atmosphere of exasperating homophobia. Open your eyes to the suffering of gay people, to their desire for love."

Charamsa timed his announcement for maximum media impact, coming as it did on the eve of a synod that is the second and final round of a review of Catholic teaching on the family.

Although the issue of homosexuality forms only a tiny part of the synod's agenda, it has dominated the run-up to the three-week meeting becoming a lightning rod for a broader debate between reformists and conservatives in the Church.

The Vatican statement said "the decision to make such a pointed statement on the eve of the opening of the Synod appears very serious and irresponsible, since it aims to subject the Synod assembly to undue media pressure."

"Msgr. Charamsa will certainly be unable to continue to carry out his previous work in (Vatican body) the Congregation for the Doctrine of the Faith and the Pontifical universities, while the other aspects of his situation shall remain the competence of his diocesan Ordinary (local bishop)."

The doctrine congregation is the body responsible for promulgating and defending Catholic doctrine.

Catholic attitudes to sexuality were already making headlines this weekend after the Vatican confirmed that Francis had hugged an old gay friend and met his partner during his recent visit to the United States.

The highly symbolic gesture, indicative of Francis's personally tolerant attitude towards gays, came a day before he met prominent gay marriage opponent Kim Davis -- another private encounter in the US that the Vatican said did not indicate support for her stance.

Last year's first round of the synod also sparked global headlines when a draft working document included a passage saying that loving same-sex relationships had qualities that the Church should recognise. After a backlash from conservatives, that groundbreaking phrase was excised from the final conclusions.

Official Catholic doctrine holds that homosexuality is an "intrinsic disorder".

Increasingly, progressive theologians have come to accept that sexuality is innate, a premise that makes it harder to maintain a stance of outright condemnation.

But that view is not shared by conservatives who hold that homosexuality is a lifestyle choice and that the task of the Church is to help gays to live celibate lives.

In 2007 Tommaso Stenico, a monsignor in the Vatican?s Congregation for the Clergy, was suspended for publicly announcing his homosexuality.

More recently in 2013, Italian weekly L'Espresso outed Monsignor Battista Ricca, who had recently been appointed to a senior post in the Vatican Bank. He then resigned.