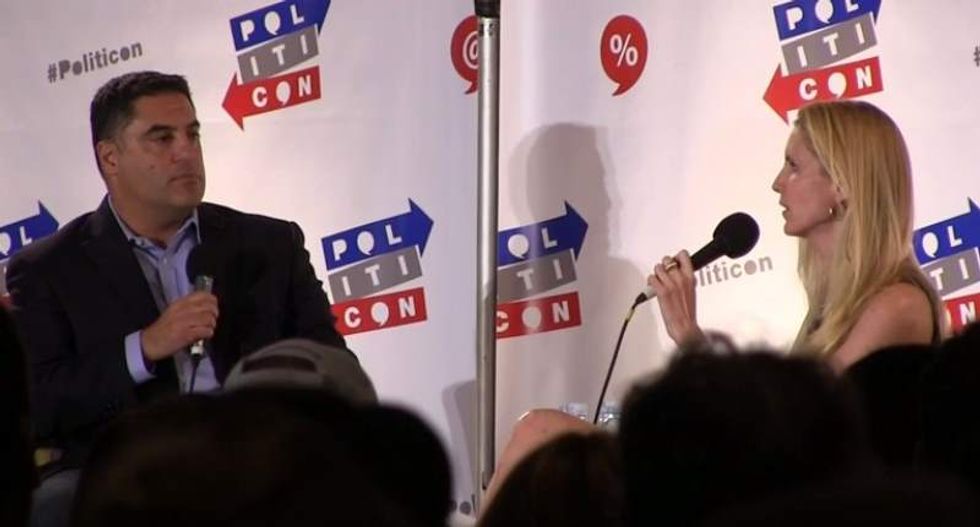 Young Turks host Cenk Uygur shut down conservative Ann Coulter when she tried to link support for immigrant communities to "cliterectomies [and] honor killings" during an Oct. 9 debate in Los Angeles.

"Let me explain to the audience the incredibly simplistic rhetorical trick she's using," Uygur said about halfway through the discussion. "She says, 'Latinos have a peasant culture, they're all coming in here and doing child rape.' And then when you can say, 'Who?' [she says] 'Whoa whoa whoa why are you for cliterectormies?' That's not what they're booing at."

He then accused her of conflating opposition to using a nuclear bomb against Iraq of expressing support for the country's former dictator, Saddam Hussein.

"Maybe you guys don't read," Coulter countered, drawing a negative reaction from the audience, before saying that several "unaccompanied minors" -- young immigrants who entered the US from Central America -- reported never seeing a working toilet before.

"It's simply a fact: we are bringing in peasant cultures," she insisted. What kind of culture does have a cliterectomy? Hmm, what kind what kind? Yes, primitive cultures. Latin America -- Mexico -- just happens to be the peasant culture that's closest to us."

Audience members continued booing Coulter as she accused Democrats of allowing immigration to continue unchecked out of a desire for votes, accompanied by "plutocrats'" desire to do so because they want cheap labor.

"I just don't see why we can't hear about Americans first," she said. "We have our own core people."

"I had hoped to achieve some level of clarity, and I believe we are on that road," Uygur responded. "Every time Ann Coulter attends a CPAC conference; every time she's invited on by a Republican politician -- and then you wonder why Latinos and Mexicans vote for Republicans or conservatives as she repeats over and over again, about a dozen times so far, 'You people come from a peasant culture.'"

Watch the debate in its entirety, as posted online, below.