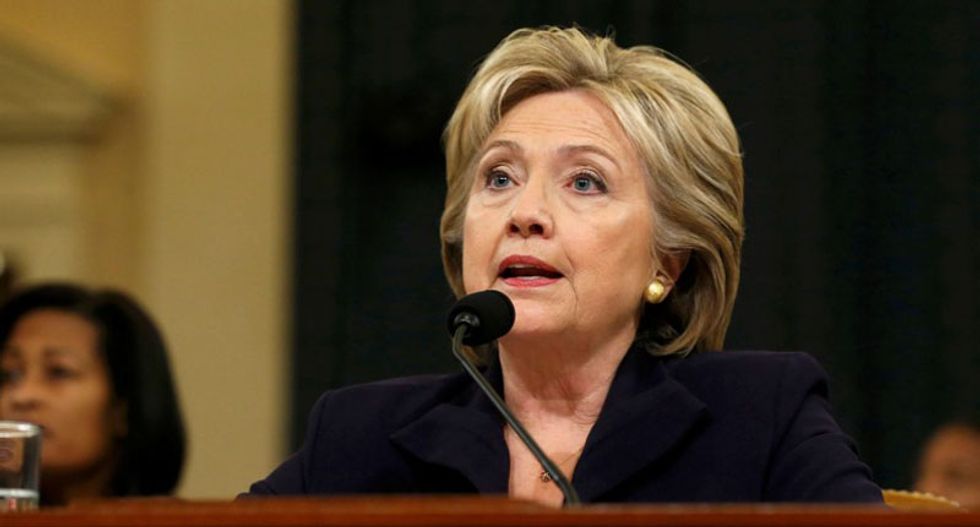 Former U.S. Secretary of State Hillary Clinton defended her handling of the deadly 2012 attacks in Benghazi, Libya, from Republican criticism during high-stakes testimony on Thursday and urged her interrogators in Congress to put national security ahead of politics.

The front-runner in the 2016 Democratic presidential race, Clinton told a congressional committee the attacks by suspected Islamist militants that killed the U.S. ambassador and three other Americans must not discourage U.S. action globally and said the incident already had been thoroughly investigated.

READ MORE: Hillary schools Benghazi commission: The Secretary of State does other things besides sending emails

"We need leadership at home to match our leadership abroad, leadership that puts national security ahead of politics and ideology," Clinton said in her only early reference to the political controversy that has dogged the panel.

Her appearance before the Benghazi panel was another major challenge for Clinton, who has been on a hot streak with a strong performance in last week's first Democratic debate and the news that her strongest potential challenger, Vice President Joe Biden, will not seek the Democratic nomination.

In hours of questioning that featured no heated confrontations with Republicans, she defended her leadership in Libya as America's top diplomat and denied longstanding Republican allegations that she personally turned down requests to beef up security in Benghazi.

Republican Representative Peter Roskam told Clinton she was the chief architect of U.S. policy in Libya and that "things in Libya today are a disaster," but Clinton said President Barack Obama made the final call on Libyan policy.

Clinton's long-awaited appearance before the panel follows months of controversy about her use of a private home email server for her State Department work, a set-up that surfaced in part because of the Benghazi committee's demand last year to see her official records.

It also follows weeks of political brawling over whether the Republican-led House committee's real goal was to puncture her front-running presidential prospects. The committee is made up of seven Republicans and five of Clinton's fellow Democrats.

NOT ABOUT CLINTON, CHAIRMAN SAYS

Trey Gowdy, the committee chairman and a former federal prosecutor, has been on the defensive over a series of comments from his fellow Republicans implying the committee's real aim was to deflate Clinton's poll numbers.

"Madame Secretary, I understand some people - frankly in both parties - have suggested this investigation is about you. Let me assure you it is not," Gowdy told Clinton in his opening statement.

"Not a single member of this committee signed up for an investigation into you or your email system."

The panel has spent 17 months looking into the attacks that killed J. Christopher Stevens, the U.S. ambassador to Libya, and three other Americans at the U.S. mission compound.

Clinton refrained from questioning the panel's motives, which she has done in recent public statements on the campaign trail.

"Despite all the previous investigations and all the talk about partisan agendas, I’m here to honor those we lost and to do what I can to aid those who serve us still," she said.

She said the emails being made public and examined by the committee did not encompass all of the work she did as secretary of state.

MOST WORK NOT ON EMAIL

"I don’t want you to have a mistaken impression about what I did and how I did it," she said. "Most of my work was not done on emails with my closest aides, with officials in the State Department, officials in the rest of the government."

As other examples, she cited communications through secure phone calls, in-person conversations and top-secret documents.

The committee's Democrats, who may discuss abandoning the inquiry after Clinton's appearance, say they think there is little left to unearth on Benghazi that more than a half-dozen previous inquiries did not find.

Clinton delivered congressional testimony on the Benghazi attacks in 2013.

The senior Democrat on the committee, Elijah Cummings, rejected Gowdy's argument and said congressional Republicans set up the panel for a partisan witch hunt.

"They set them loose, Madame Secretary, because you're running for president," he told Clinton, calling for an end to the "taxpayer-funded fishing expedition." He said the committee had spent $14.7 million of taxpayer money over 17 months.

A 2012 report by a government accountability review board sharply faulted State Department officials for providing "grossly" insufficient security in Benghazi, despite upgrade requests from Stevens and others in Libya.