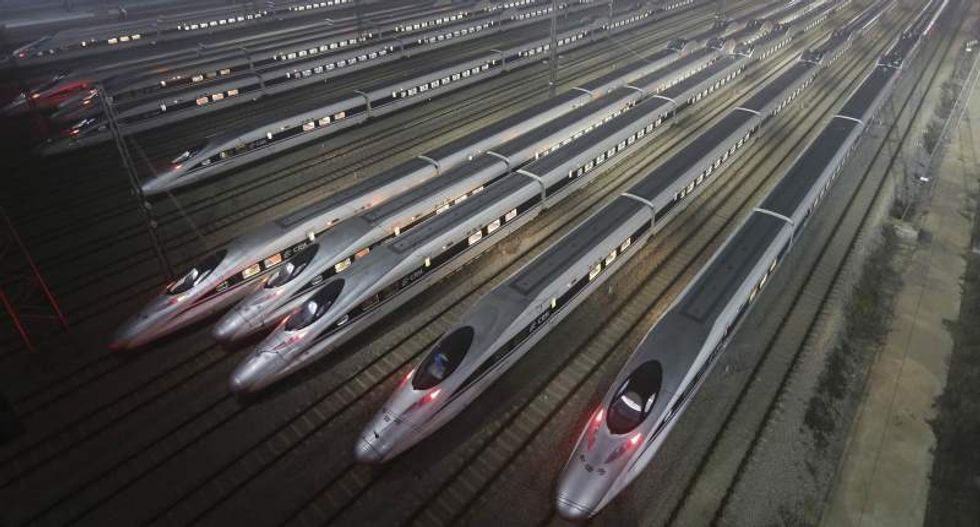 CRH380 (China Railway High-speed) Harmony bullet trains are seen at a high-speed train maintenance base in Wuhan, Hubei province, in this file photo taken on Dec. 25, 2012. Photo by Stringer for Reuters.

A team of Chinese firms, along with the Export-Import Bank of China, wants to build and finance a large part of California’s proposed 800-mile high-speed rail project.

The firms expressed their interest last month in a 23-page document sent to the California High-Speed Rail Authority. The authority asked private companies from around the globe to help shape the state's strategy to launch the first stage of its train line, considered the most ambitious infrastructure project in the United States.

Led by China Railway International, the Chinese team proposed it could provide big elements of the project, including design expertise, construction, equipment procurement, and rolling stock. It also proposed financing from the Export-Import Bank of China.

By packaging large pieces of the high-speed rail line together, for delivery by a single contractor, the project’s cost and construction timeline would be greatly reduced, the team proposed.

“To the Chinese team, a relatively large-scale contract is proper and reasonable,” said the letter, obtained by Reuters through a Public Records Act request.

California’s high-speed rail line would run trains at speeds of up to 220 miles per hour between Los Angeles and San Francisco by 2029 and, later, expand to San Diego and Sacramento.

The United States is a key target for China's rail industry, even though policymakers have been split over the need for high-speed rail and some have taken a dim view of Chinese involvement. Last month, a unit of China's CRRC Corp, the world's biggest train maker by revenue, agreed to a deal to help build a high-speed link between Las Vegas and Los Angeles.

California still needs a large amount of funding to complete its rail line. About $13.2 billion of the estimated $68 billion has been raised through state and federal funds, plus a pledge of cap-and-trade proceeds, or funds paid by companies to offset carbon emissions.

The Chinese team proposed that under “appropriate loan conditions," the Export-Import Bank of China could "satisfy the financing needs of the project.”

“Due to the huge financing gap of the project, potential private investors and lenders may be cautious,” the Chinese team wrote.

China has recently clinched contracts in Russia, the latest in an aggressive push to procure high-speed rail deals overseas. It faced hurdles in Mexico and Indonesia due to bureaucratic flip-flops in those countries.