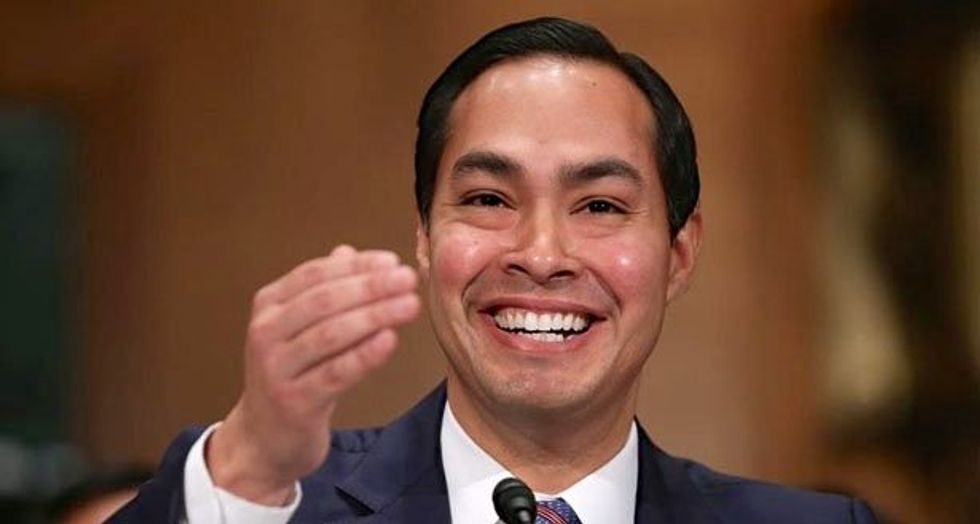 Democratic presidential contender Hillary Clinton won the backing of Housing and Urban Development Secretary Julian Castro on Thursday and said she would seriously consider making the rising Hispanic leader her running mate if she wins her party's nomination.

Clinton and the other Democrats in the November 2016 race for the White House have pushed hard for support among Hispanics, a fast-growing and critical voting bloc that has moved toward Democrats in recent elections as Republicans have stymied comprehensive immigration reform in Congress and disparaged Mexican immigrants on the campaign trail.

"I am going to look really hard at him for anything, because that's how good he is," Clinton said at a U.S. Hispanic Chamber of Commerce meeting in San Antonio, Texas, when asked if Castro might be her vice presidential pick.

Appearing with Clinton at a later "Latinos for Hillary" rally, Castro said he has long respected her ability to appeal to people of all backgrounds.

"Through the years she has always, always been there for us, and today we're here for her," said Castro, who is the second member of President Barack Obama's Cabinet to endorse Clinton along with Agriculture Secretary Tom Vilsack.

Clinton said she was "thrilled" to win the backing of Castro, a former mayor of San Antonio. Castro's twin brother Joaquin, a U.S. congressman, already endorsed Clinton and campaigned with her in Nevada.

While the endorsement was not a surprise, the timing was a boost for Clinton. It came on the heels of a strong debate performance on Tuesday night and while Vice President Joe Biden is still pondering a possible run for the White House.

Clinton condemned the hardline comments about immigration that have been prominent in the Republican presidential race, particularly by Donald Trump, who has maintained a comfortable edge in opinion polls among those identifying themselves as Republicans.

"If you listen to all of them, they all to a degree or so sound like him, they just don't have the pizzazz or the hair, but they are making a lot of the same unfortunate points in their candidacies," Clinton said.

(For more on the 2016 presidential race, see the Reuters blog, “Tales from the Trail” (http://blogs.reuters.com/talesfromthetrail/)