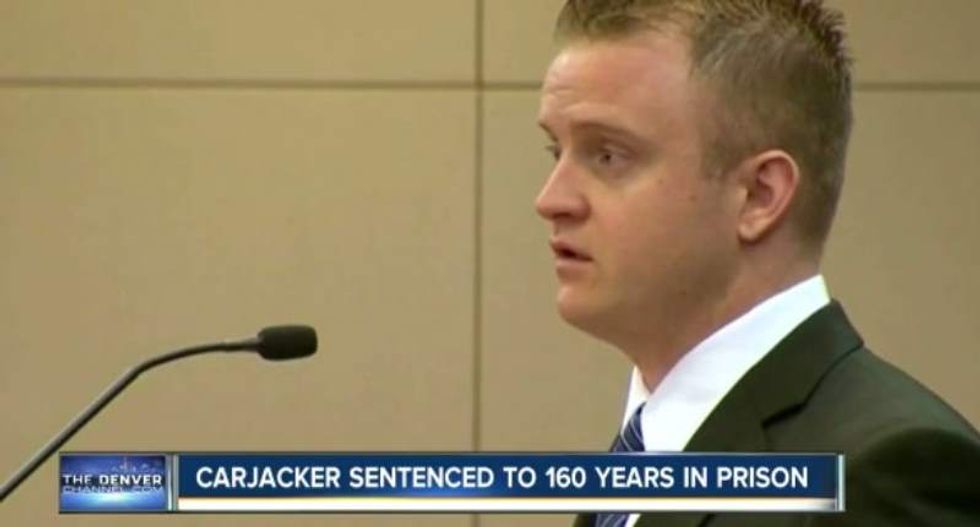 A Colorado man convicted of carjacking three vehicles, including one with a 4-year-old boy inside, was sentenced on Friday to 160 years in prison for the high-speed chase that was seen on live TV, prosecutors said.

Ryan Stone, 30, was found guilty in April of 11 felonies including attempted manslaughter and first-degree assault for injuries sustained by a police officer who tried to stop him, the Douglas County District Attorney's Office said in a statement.

The pursuit began in the town of Longmont, about 30 miles north of Denver, where Stone, who was wanted for failing to appear in court on drug charges, stole a sport-utility vehicle outside a convenience store.

A 4-year-old boy was in the SUV when Stone sped away, heading south on Interstate 25 toward Denver and leading police on a chase at speeds of over 100 miles per hour, authorities said.

In the town of Brighton, Stone crashed the SUV into a minivan and abandoned the vehicle with the uninjured pajama-clad boy inside, the TV footage showed.

He was then seen yanking a woman driver from her car, stealing it and speeding away.

Stone crashed that vehicle near Denver International Airport, where he carjacked another vehicle and again fled.

Colorado State Patrol Trooper Bellamann Hee was struck when he attempted to deploy "stop sticks" south of Denver in an effort to deflate the stolen vehicle's tires.

Stone ultimately crashed the third vehicle and was arrested after a brief foot chase.

In phone calls made from jail by Stone and released by prosecutors, the suspect blamed Hee for the injuries the state trooper sustained, which included a shattered leg.

"The dumbass is standing in the middle of the highway," Stone told his mother in one call.

In another call, Stone boasted to a female friend about the international news coverage his case garnered.

"My lawyer told me I made the news in the UK and Australia," Stone said, laughing.

Stone will not be eligible for parole until 2085, the district attorney's office said.

Watch a report on Stone's sentencing, as aired on KMGH-TV, below.