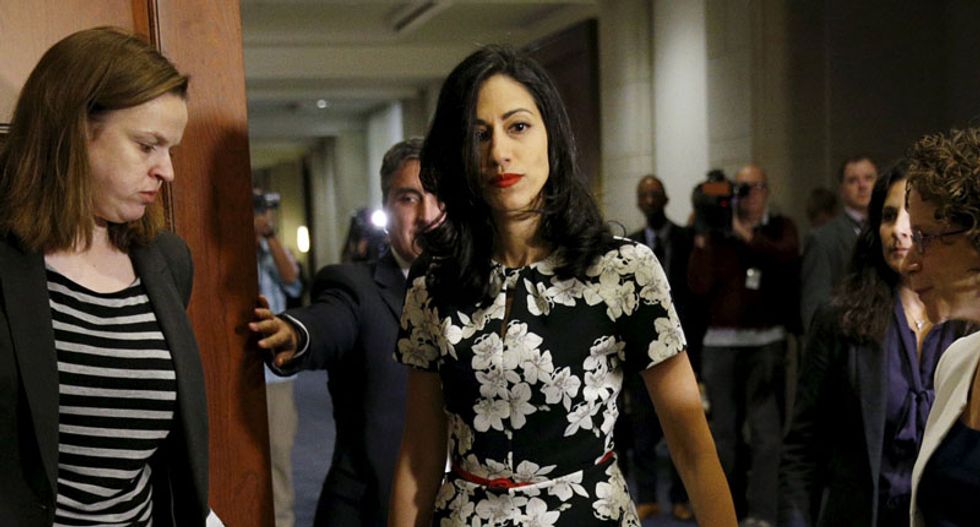 Turmoil swirled again on Friday around the Republican-controlled Benghazi committee in the U.S. House of Representatives as it began questioning a senior aide to Hillary Clinton.

Huma Abedin, a close confidante for years of the Democratic presidential campaign front-runner, in the morning entered a closed-door interview of undetermined duration with the panel.

After she went in, Democratic Representative and panel member Elijah Cummings came out and said summoning Abedin raised the question of whether the panel is "a taxpayer funded effort to derail the (presidential) candidacy of Hillary Clinton."

He said Abedin, who is the vice-chairwoman of Clinton's campaign, had no responsibilities related to the tragedy the committee was set up to investigate. Abedin's appearance came less than a week before Clinton is to appear before the panel.

Organized originally to probe the 2012 attack on U.S. facilities in Benghazi, Libya, the committee has been under attack by Democrats, who say it is a partisan investigation unleashed by the Republican-majority House.

The committee has come under especially harsh criticism since Representative Kevin McCarthy, the No. 2 House Republican, suggested in a recent television interview that the probe had helped to drive down Clinton's presidential poll ratings.

Clinton was secretary of state at the time of the attacks, during which four Americans were killed including Ambassador Chris Stevens.

Cummings said Friday that the panel's calling in Abedin was more evidence that McCarthy had been telling the truth about the committee's real aims.

Abedin, "based on other testimony that we've gotten, has no policy responsibilities, no operational responsibilities, was not with Secretary Clinton on the night of this phenomenal tragedy," Cummings told reporters during a break in committee proceedings.

The Benghazi panel's chairman, Representative Trey Gowdy, did not attend the interview with Abedin, and it was unclear how many members of the committee were present.

Committee aides said Abedin was called to answer questions about the events leading up to, during and after the attacks, as well as executive branch activities and efforts to comply with congressional inquiries into them.

A spokesman for Gowdy said he does not attend every committee interview, but does talk with the staff beforehand "and he trusts his colleagues and staff to then ask substantive investigatory questions."

Clinton spokesman Nick Merrill said it was unclear why the committee had called in Abedin, "given her lack of knowledge about the events surrounding Benghazi."