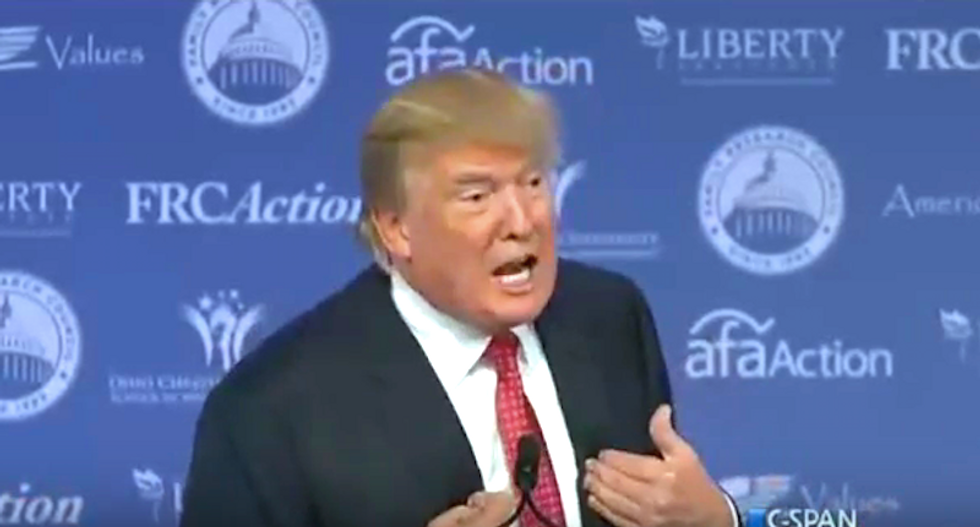 Two days after a gunman killed nine people at an Oregon community college and then shot himself dead , the Republican presidential frontrunner, Donald Trump, seemed to accept the inevitability of mass shootings in the US.

In a rare sit-down interview, for broadcast on NBC’s Meet the Press on Sunday, Trump told Chuck Todd: “I have to say, no matter what you do, you’re gonna have problems.

“Because you have sick people. They happen to be intelligent. And, you know, they can be sick as hell and they’re '. They are going to be able to break the system.”

The New York real-estate billionaire, who boasts of possessing a concealed carry permit, said he did not see the need for increased firearms regulations.

At a rally in suburban Nashville on Saturday, he mentioned his New York state handgun carry permit and added that anyone who attacked him would be “shocked”, because he would emulate Charles Bronson in the vigilante film Death Wish .

“I’m a very, very big second amendment person,” Trump said in Tennessee. “This is about self-defense, plain and simple.”

Trump reminisced about the Bronson-starring 1974 film and got people in the crowd to shout out the title in unison. In the movie, an affluent, liberal architect embarks on a vigilante mission after his wife is killed and his daughter raped.

“Today you can’t make that movie because it’s not politically correct,” Trump said.

Speaking to NBC, Trump said those US jurisdictions with “the strongest, the most stringent laws [on gun control] are in almost every case the worst places. It doesn’t seem to work.”

Instead, in both rally and interview, the Republican frontrunner blamed mental illness for such shootings as that at Umpqua Community College.

Trump also defended his newly introduced tax plan , which independent economists estimate will cost $12tn over 10 years, by noting his ability to cut costs. He pointed to transportation as one place where he could save money.

“I look at the cost of a road where they’re gonna spend $600m building a simple road,” said Trump. “And I don’t mean I’m gonna save you a little bit. We’re gonna bring in … you’re gonna build a better road. You’re gonna have a better road for a fraction of the cost.”

The Republican frontrunner also hit back when Todd pointed to polls which have him losing by a landslide to both Vice-President Joe Biden and Vermont senator Bernie Sanders in any such general election matchup.

Trump, who has long touted his poll numbers in the Republican primary, said: “I haven’t focused on Bernie Sanders.”