‘Douchebag says, what?’: Colbert opens a can of whoopass on Trump and CNBC -- and it’s awesome 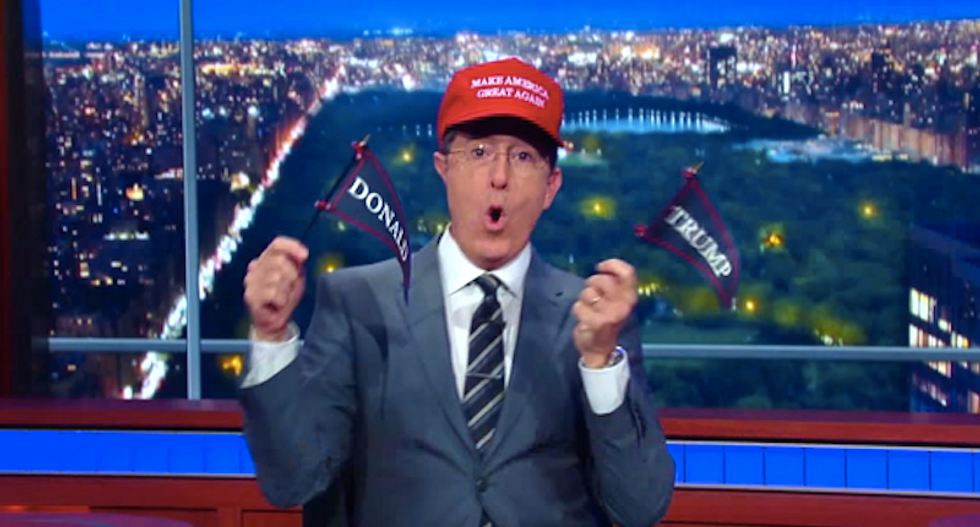 Stephen Colbert tackled the debacle that was the Republican presidential debate on CNBC.

"Did you guys watch the debate on CNBC (Wednesday) night?" Colbert asked the audience, who cheered in affirmation. "Yeah? I'm so sorry. I did watch it, and in some ways it was impressive. It managed to thread the needle between confusing and boring."

Colbert said the CNBC moderators set the tone with the very first question, when the candidates were asked -- as if conducting a job interview -- what was their biggest weakness.

"They opened with the one question that no one in human history has ever answered honestly," Colbert said. "When I interviewed for this job, I said my biggest weakness was, sometimes I work so hard I forget to cash my paychecks. But of all the non-answers the candidates gave, Ted Cruz's was the most least: 'If you want someone to grab a beer with, I may not be that guy, but if you want someone to drive you home, I will get the job done.'"

He said the debate was "unburdened by a shred of respect," and he showed video of the moderators asking Sen. Marco Rubio about his missed votes, reminding Jeb Bush that his lectern position showed how far behind he was in the race, pointing out that Carly Fiorina was fired as CEO of Hewlett-Packard and wondering whether Donald Trump was conducting a "comic book version of a campaign."

"What the moderators lacked in courtesy, they made up for in lack of preparation," Colbert said, and showed video of moderator Betsy Quick asking Trump about his criticism of Facebook CEO Mark Zuckerberg but being unable to demonstrate that the candidate had actually done so.

"Much like the campaign season itself, last night felt like an unending slog, and believe it or not, it could have been even unending-er if it wasn't for the heroic action taken by the knight in shining bronzer," Colbert said.

He showed video of Trump claiming that he had renegotiated the debate down from three and a half hours to a less tortuous two hours -- and the Colbert donned one of the real estate tycoon and reality TV star's trademark "make America great again" hats and waved "Donald Trump" flags.

"Donald, you saved us from another hour and a half of that debate," Colbert said. "You truly are a great leader, and you have earned my vote -- as long as you can negotiate your presidency down from four years to -- you know, two hours feels about right."