Elizabeth Warren: Republicans want to go back to days of women dying over unwanted pregnancies 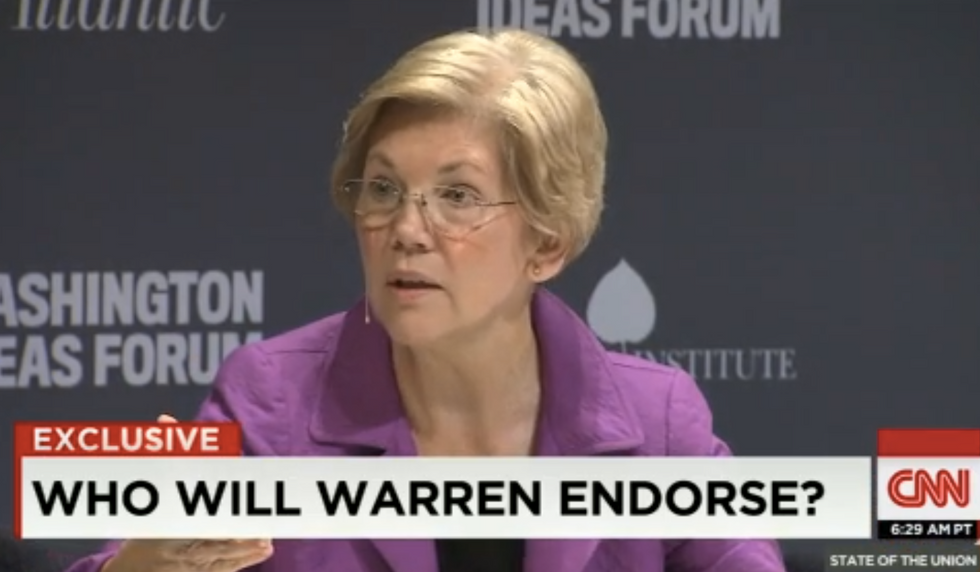 In an interview with CNN's Jake Tapper, Sen. Elizabeth Warren (D-MA) declined to endorse any of the candidates currently running, in spite of Tapper's badgering.

"Do you want to ask this six different ways?" she asked the CNN anchor as he attempted to get her to praise Sen. Bernie Sanders (I-VT) over former Secretary of State and First Lady Hillary Clinton.

"What do you make of the fact that two of the leading Republican presidential candidates -- Donald Trump and Jeb Bush -- are now both endorsing closing the loophole when it comes to hedge fund managers, that carried interest loophole?" Tapper asked.

"It means that even when your ears are stuffed with money, you get a little sound that comes through," Warren said, "and that's what's happening here. It's, like, hello, yeah, billionaires should not be paying taxes at a lower rate than teachers and firefighters. And that has even seeped through to a few of the rich guys on the other side. Stunner!"

She went on to slam Republicans for trying to shut down Planned Parenthood on the basis of anti-choice zealots the Center for Medical Progress' phony video smear campaign.

"(T)he Republicans say the first issue that we’ve got to discuss, the number one thing, everything else can go forward on the budget or we can cut, everything else, the first thing we’ve to do is defund Planned Parenthood. That means defunding healthcare for women,” she said.

She underlined her commitment to women's right to choose, saying, "When I talk about 1955, I’m talking about a world when women died. I’m talking about a world when women committed suicide rather than go forward with a pregnancy they could not handle. And what the Republicans are saying is that they want to go back. And I want to make sure we are not going back. Not now, not ever.”