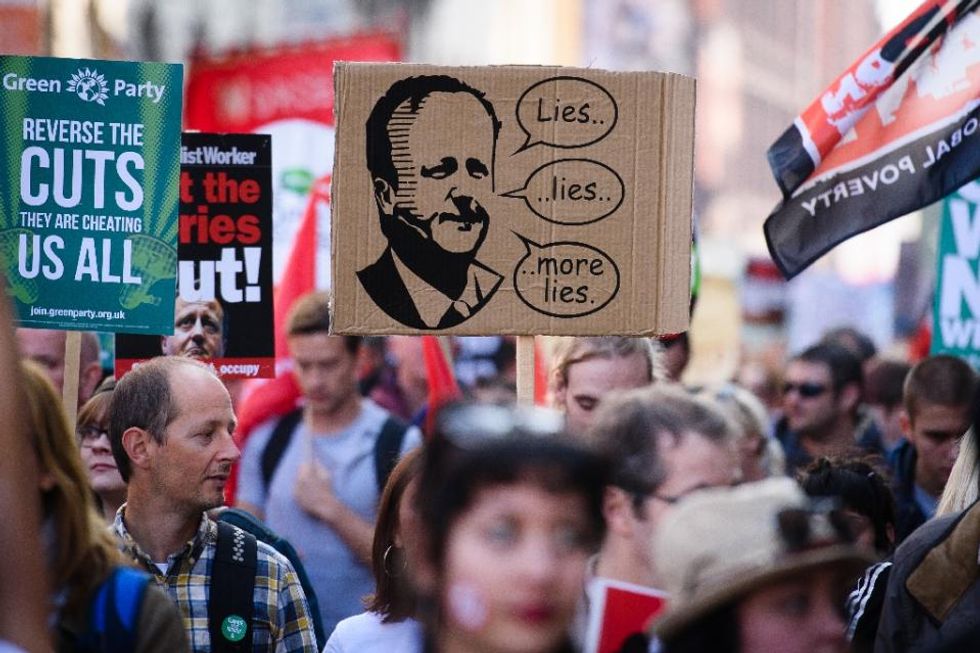 Image: Demonstrators hold placards as they march through the streets of Manchester in protest against the British Conservative government on October 4, 2015 (AFP Photo/Leon Neal)

Police and the Trades Union Congress said that about 60,000 people took part in the protest in the northwestern city of Manchester. Four people were arrested.

The TUC called the protest with the slogan "No to austerity, yes to workers' rights", citing what it called the government's "damaging programme of austerity and their attacks on the rights of working people and their unions".

The Conservative government is reducing spending in order to balance the books and ultimately get Britain to turn a profit so it can start to pay down its debts.

It is also pushing through legislation to curb strike action by ensuring a minimum 50-percent turnout in strike ballots.

The Conservatives won a majority of seats in the May general election.

James Penfold, 44, a nuclear waste scientist, said: "I think they're taking the cuts way too far. There are different ways of dealing with the deficit which involves taxation.

"What they are doing to the country is catastrophic and in many years we will really be regretting what's happened.

"I fear for our kids. There is so much debt and burden being laid upon them."

A section of protesters heckled attendees to the Conservative conference, calling party members and staff "scum" as they entered the venue. Some journalists complained of being spat at, and one delegate was hit by an egg.

But Chief Superintendent John O'Hare of Greater Manchester Police said: "The overwhelming majority of people have exercised their democratic right to protest with dignity and good grace."

The government, which won the first Conservative majority for almost 20 years after promising a strong British economy, plans to cut 12 million pounds ($18 million, 16 million euros) from welfare spending by 2020.

Among the targets of the cuts are housing aid, tax credits and money paid to disabled people and the unemployed.

"I think the Tory cuts are very unfair and are damaging society," said Pauline Gibson, 55, an unemployed nurse from Liverpool, who wore a fake pig nose.

"I don't mind austerity as long as there's austerity for everybody and not just for the people of the North and the working class."

The new leader of Britain's Labour party Jeremy Corbyn is due to attend an event on Monday in Manchester on the future of the postal system, going against convention that opposition leaders stay away from rival parties' conferences.

Corbyn has appealed to protesters to keep demonstrations peaceful and a spokesman for the leader said he condemned the alleged spitting.

"What has happened is inexcusable and journalists must be able to do their job," the spokesman said.

Sunday's rally was the first of a series of protest events including debates, parties and flash mobs set to target the Conservative conference before it finishes up on Wednesday.

The chairman of the Conservative party, Andrew Feldman, advised those attending the conference not to wear their access passes outside the barriers around the large Manchester Central complex where the event is held.

Firefighters battling to protect the world's biggest tree from wildfires ravaging the parched United States said Friday they are optimistic it can be saved.

US panel recommends COVID boosters for people 65 and older

A panel of leading US medical experts advising the government voted in favor of authorizing boosters of Pfizer's coronavirus vaccine for everyone aged 65 and up, as well as people at high risk of developing severe Covid.

The same committee however rejected an initial proposal, submitted by Pfizer and backed by President Joe Biden's administration, to fully approve boosters to everyone aged 16 and over.