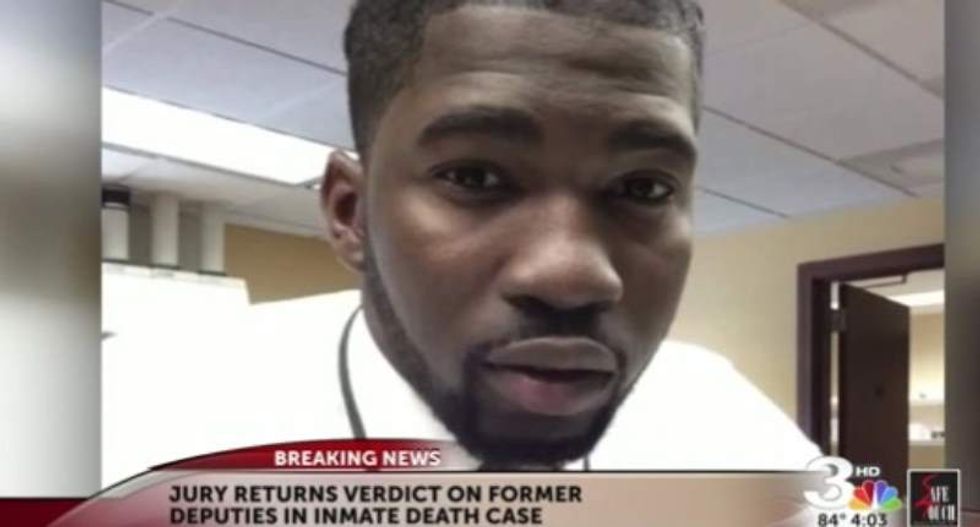 Two former sheriff's deputies in Chatham County, Georgia were acquitted on Friday of involuntary manslaughter charges in connection with the death of 22-year-old Mathew Ajibade in custody this past January, WSAV-TV reported.

Both Jason Kenny and Maxine Evans were found guilty on separate charges. Kenny, who was seen Tasering Ajibade in footage from the encounter, faces one-to-three years in prison after being convicted of cruelty to a prisoner. Evans, who was convicted of falsifying public records, could spend between two and 10 years in prison.

Ajibade was arrested on Jan. 1 after his girlfriend and family contacted police saying he was going through a "bipolar episode."

Authorities said that Ajibade resisted when they tried to pull him away from the woman. He was taken to jail, where footage shows deputies taking him to the ground. Another video, shot on a camera mounted on Kenny's Taser, shows Ajibade being shocked in the groin after being placed in a restraint chair. He was later found unresponsive in the chair, and subsequently pronounced dead.

"I knew that that same system that failed Mathew would not be the system that got him justice," said Ajibade's cousin, Chris Oladapo. "I had already warned my family not to expect anything. We expected nothing, and we got nothing."

Watch WSAV's report on the verdict, as aired on Friday, below.