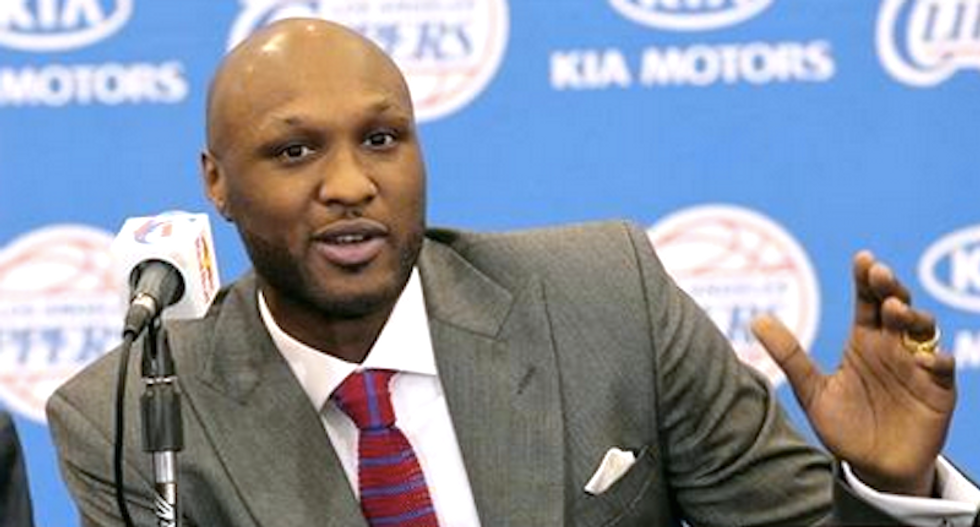 Lamar Odom, the two-time NBA champion and reality TV star fighting for his life after a brothel binge, has regained consciousness in a Las Vegas hospital, US media said Friday.

ESPN, citing unnamed sources, said the 35-year-old was even able to speak a few words and USA Today, citing a source at Sunrise Hospital, reported he opened his eyes and appeared to react to voices and other sounds.

Daniel Artest, a longtime friend of Odom and brother of Los Angeles Lakers forward Metta World Peace -- formerly Ron Artest -- tweeted that Odom "did a little talking breathing on his own."

Odom had been hospitalized and on a life-supporting ventilator since Tuesday, when he was found unconscious at the Love Ranch brothel outside Las Vegas.

Nye County Sheriff Sharon Wehrly said officers who responded to an emergency call were told Odom had used cocaine and sexual performance enhancer supplements. An employee who called 911 said Odom was unresponsive with blood and "white stuff" dripping from his nose and mouth.

Amid an outpouring of support from former NBA teammates and with his estranged wife Khloe Kardashian at his side, Odom was reported to be making little progress on Wednesday and Thursday, with some media citing sources as saying he had suffered at least one stroke and possible brain damage or other organ failure.

Kardashian, her sister Kim Kardashian and others in their celebrity clan posted matching statements on their websites saying they would take a break from publishing content on their various media platforms as they focus on Odom's recovery.

"As a family, we've decided to hold off on publishing content across our apps while we continue to support and pray for Lamar," the statement said. "Thank you for you kindness and understanding during this difficult time."

Odom married Khloe Kardashian in 2009 in a splashy televised wedding. She filed for divorce in 2013, but the split wasn't immediately finalized and she reportedly remains his next of kin, able to make medical decisions on his behalf.

Odom's Kardashian connection gained him even wider fame than the two NBA titles he won with the Los Angeles Lakers in 2009 and 2010.

Odom, who earned Olympic bronze with the USA at the Athens Games, last played in the NBA in 2013.