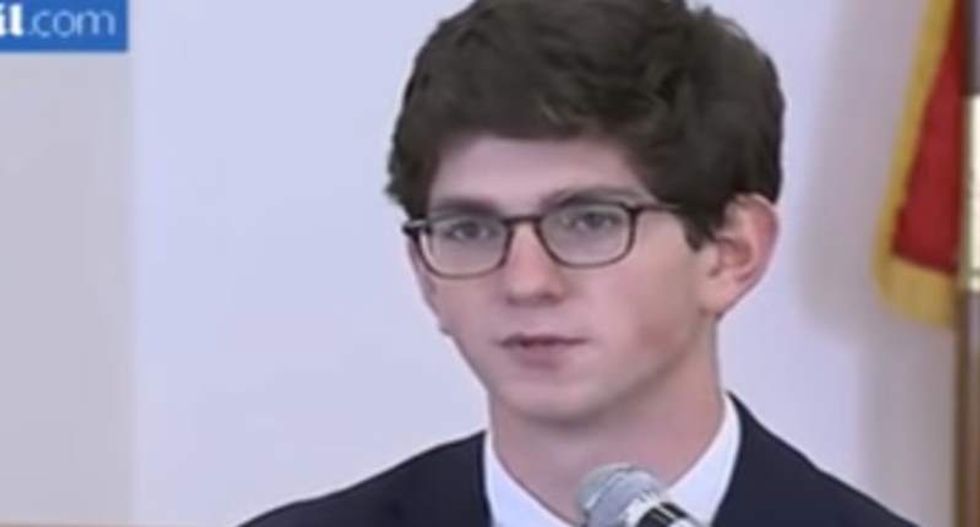 A New Hampshire judge on Thursday sentenced a former student at an elite prep school to serve one year in jail for luring an underage classmate into a sexual encounter.

Owen Labrie, 20, was convicted in August at the end of a high-profile trial that cast a harsh light on the culture of the elite St. Paul's School and its tradition of a "senior salute," in which final-year students invited underclassmen for sexual encounters.

Labrie could be seen crossing himself in a gesture of prayer as he waited for Merrimack County Superior Court Judge Larry Smukler to issue his sentence, which was considerably less than the seven years prosecutors had sought. He was also ordered to register as a sex offender for the rest of his life.

"This was not consensual," Smukler said. "You did not take the time to get to know the victim."

The girl, who Reuters is not identifying, did not appear in court but gave a half-hour statement by video, saying she continued to struggle with the traumatic memory of the assault.

"I don't really know how to put one foot in front of another. I don't want to feel imprisoned the rest of my life," she said, speaking haltingly and at times through tears. "I want to be safe again, and I want justice."

Labrie was found not guilty of three counts of felony rape against the girl, who was a 15-year-old freshman at the time of their encounter last year on the campus of their boarding school in Concord, New Hampshire.

Prosecutors had argued that the victim accepted Labrie's invitation for a "senior salute" in the final weeks of school but never intended to have sex with him.

Labrie's attorney, J.W. Carney, had argued that probation would be a more appropriate punishment than prison, noting that Labrie had already lost a full scholarship to Harvard University and that his name would forever be associated with the case.

"Owen decided to engage in a 'senior salute.' He has tremendous remorse for doing what he did," Carney said. "Owen looked to St. Paul’s to guide him and instead they misled him."

Carney said he would be appealing the decision, and the judge said Labrie would be allowed to remain free pending that appeal.

The victim's father, an alumnus of St. Paul's, bashed what he called the school's "entitled" culture.

St. Paul's is one of the nation's top prep schools, and its alumni include well-known figures in business and politics, including U.S. Secretary of State John Kerry.

Former Democratic strategist and infamous southerner James Carville bashed Republicans for their behavior during the State of the Union Address on Tuesday, calling them "white trash."