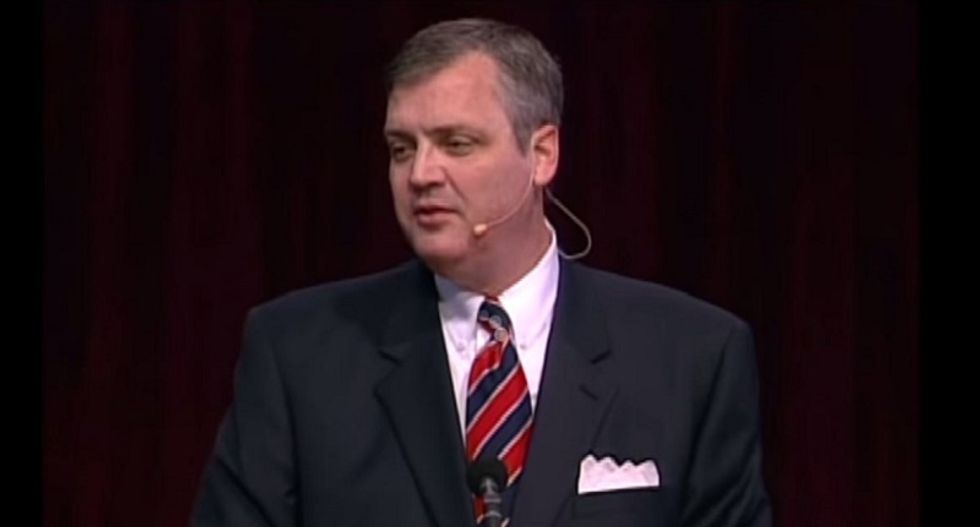 A Kentucky Baptist pastor urged Christians to boycott all same-sex weddings -- even those of their own children. He's now getting backlash from the LGBT community and fellow Christians.

R. Albert Mohler Jr., president of Southern Baptist Theological Seminary, authored a new book, We Cannot Be Silent. In it he says that Christians should boycott same-sex weddings of friends and loved ones because attending would be a sign of "moral approval of the union," the Courier-Journal reports.

Mohler also wrote that even if scientists proved that LGBT people are born gay, it would still be a sin, saying that "even the natural world" is tainted by human sin. Scientists have in fact found a genetic link to sexual orientation. Mohler also said transgender people should "consult with their pastors" about whether or not to have surgery to return to their birth sex.

Mohler's hard line has divided the religious community with some Christians siding with LGBT activists in saying Mohler was wrong.

One of his strongest critics was Timothy Love, one of the petitioners for whom the Supreme Court's same-sex marriage ruling was a victory. Love and his husband, Larry Ysunza, are Christians and had a Christian wedding ceremony.

“We are closer to God now more than ever because he has shown us a miracle in modern times, right before our very eyes, and allowed us to have a role in it,” Love told the Courier-Journal. “We look back at the long timeline of our relationship (35 years) and truly know that there has been a hand over us protecting us through this difficult journey. There are none so blind as those who will not see.”

Rev. Joseph Phelps of the Highland Baptist Church called Mohler's take "harsh and offensive." He told the Courier-Journal that Mohler's directive would cause "damage and division” in “families and society.”

Another Christian author said he believes Jesus would be "all for attending" a same-sex wedding but equated doing so with the Bible story of Jesus dining with "prostitutes and drunkards."

"“I have to extrapolate that Jesus would be all for attending a same-sex marriage ceremony," Stephen Arterburn, Christian author and president of New Life Ministries told the paper.

"Dr. Mohler's self-righteous intractability on this issue — even banning followers from simply attending the weddings of their LGBT loved ones — can cause nothing but strife, heartache and hardship,” Chris Hartman, director of the Fairness Campaign, told the Courier-Journal.