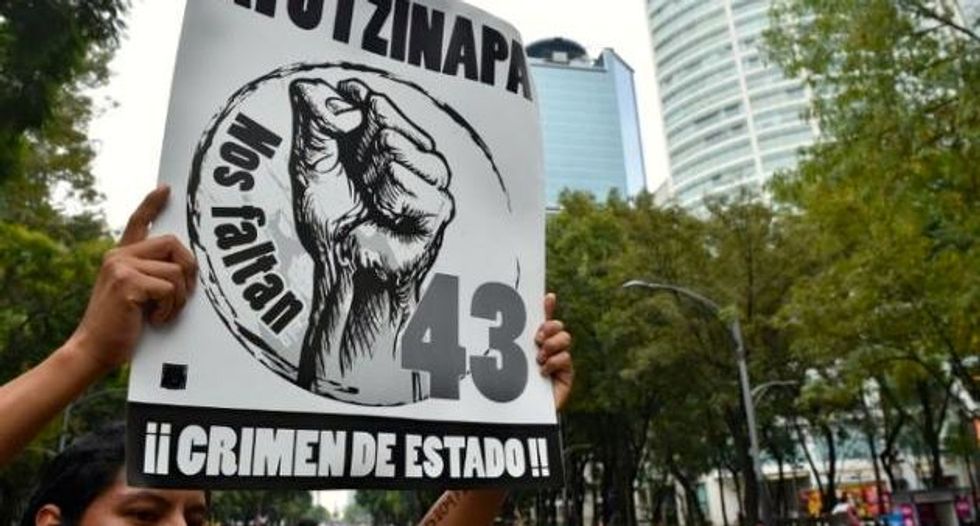 AFP/AFP/File - Fathers, relatives and people march during a protest in Mexico City, on September 26, 2015, to commemorate the first anniversary of Ayotzinapa school students disappearance

Even before hitting movie screens, a docudrama about the disappearance of 43 college students raised hackles in Mexico for echoing the government's disputed conclusions in the case.

Survivors say "La Noche de Iguala" (The Night of Iguala) exploits the tragedy and paints the students as criminals.

Columns have been written against the film and a petition was created on Change.org in a bid to block the movie, which debuts in 30 Mexico City cinemas on Friday.

Its director, journalist Jorge Fernandez Menendez, has defended his movie as the "uncomfortable truth."

The film's trailer shows reenactments of the horrific night of September 26, 2014, when scores of students from a teacher college were attacked by police in league with the Guerreros Unidos drug cartel in the city of Iguala.

One scene shows a hitman accusing his victims of belonging to a rival gang in the southern state of Guerrero. Another shows bodies piled up and torched at a garbage dump.

Independent investigators and parents of the students have rejected the government's conclusion that the cartel killed and incinerated the students at the landfill after confusing them with Los Rojos gang members.

Omar Garcia, one of the students who survived the attack, called for a boycott of the movie.

"This is part of a campaign to smear us and back the government's version (of the events)," Garcia told AFP.

"The investigation must continue to get to the truth," he said, charging that the film is a "new attempt to by the government to mislead."

"It's a total lack of respect because the filmmakers never approached us or the parents" to find out if they agreed to be represented in the movie, Garcia said.

Juan Jesus Montes, who was among 200 actors to take part in a casting call, said he only learned what the movie was about on the first day of shooting.

The 34-year-old actor portrayed a fictional character nicknamed "El Flaco," who accuses another student of being a drug gang member.

"I'm an actor. I went to act, nothing more. Given that it's a delicate issue, I did it with respect and started checking all available information (about the case)," Montes said.

Montes, who has appeared in soap operas, said he felt "between a rock and a hard place" due to the students' criticism of the film.

Menendez said he decided to use actors for half of the movie because there are no images of "key moments" in the drama.

"That's why we decided to recreate and dramatize it," he told Radio Formula, adding that the other half of the movie is in the classic documentary style.

Menendez acknowledged that his film is closer to the conclusions of the attorney general's office, which months ago declared that its investigation was the "historic truth."

His movie, he said, "is neither a historic truth nor an alternative truth. It's an uncomfortable truth."

The Iguala case has inspired others to write books about the horrific night. Even a comic book, "Vivos se los Llevaron" (They Took Them Alive) has been made.

Next Tuesday, another documentary about the tragedy will make its debut, "Mirar Morir" (Staring at Death), focusing on the army's role in the case.