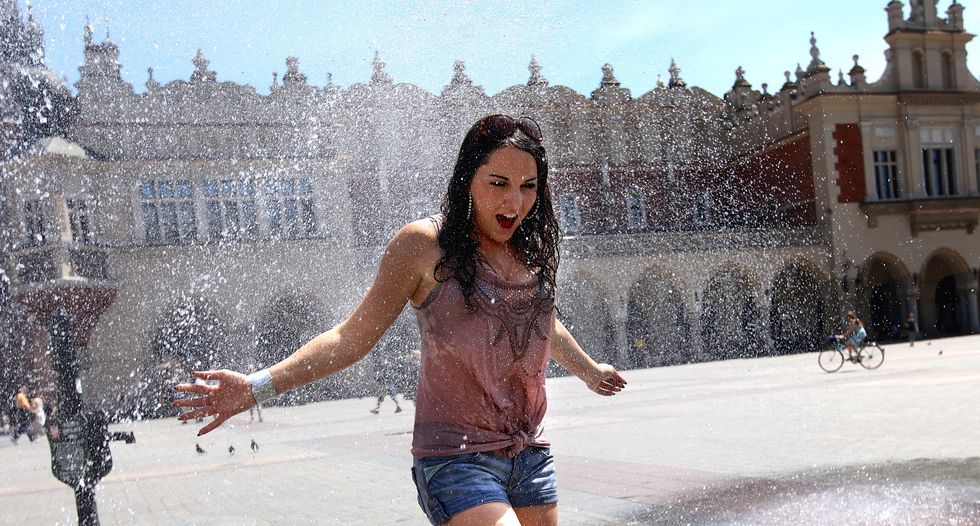 Girl Trying to Cool Down at Fountain (Shutterstock www.shutterstock.com)

The first nine months of this year have been record-breaking for heat worldwide, in another sign that dangerous global warming continues to mount, US government scientists said Wednesday.

"The first nine months of the year (January-September) were also record warm."

The latest report brings 2015 closer than ever to ousting 2014 for the most scorching year in modern times.

The calculation is made by averaging temperature across global land and ocean surfaces.

"September's high temperature was also the greatest rise above average for any month in the 136-year historical record, surpassing the previous record set in both February and March this year by 0.02 Fahrenheit (0.01 Celsius)," NOAA said in its monthly report.

So far, seven of the first nine months of 2015 have broken monthly historical heat records.

The last five months in a row have been record warm for their respective months.

Unusually high temperatures were seen in September across northeastern Africa, the Middle East, parts of southeast Asia, and selected parts of north and South America.

Some cool spots were noted at the tip of South America, far western Canada, Alaska, and parts of central Asia.

In Canada, Ontario had a record warm September, with temperatures some nine degrees Fahrenheit (five celsius) above average.

Meanwhile, the United States marked its second warmest September on record, with a temperature 3.7 degrees Fahrenheit (2.1 Celsius) above the 20th century average.

Norway was also among the leading heat record-breakers, while Spain marked its coldest September since 1996.

Britain was also cooler than expected.

"England and Wales each observed their coolest September since 1994," said the NOAA report.

Warmer ocean temperatures associated with El Nino in some parts of the world helped boost the September global sea surface temperature to 1.46 Fahrenheit (0.81 Celsius) above the 20th century average of 61.1 Fahrenheit (16.2 Celsius), "the highest departure for September on record," NOAA said.

"A large patch in the Atlantic Ocean south of Greenland remained much cooler than average."

The amount of sea ice in the Arctic was last month was the fourth smallest on record.

Sea ice cover in the Antarctic was also below average for the 1981-2010 time period, marking the 16th smallest Antarctic sea ice extent on record and the smallest since 2008.