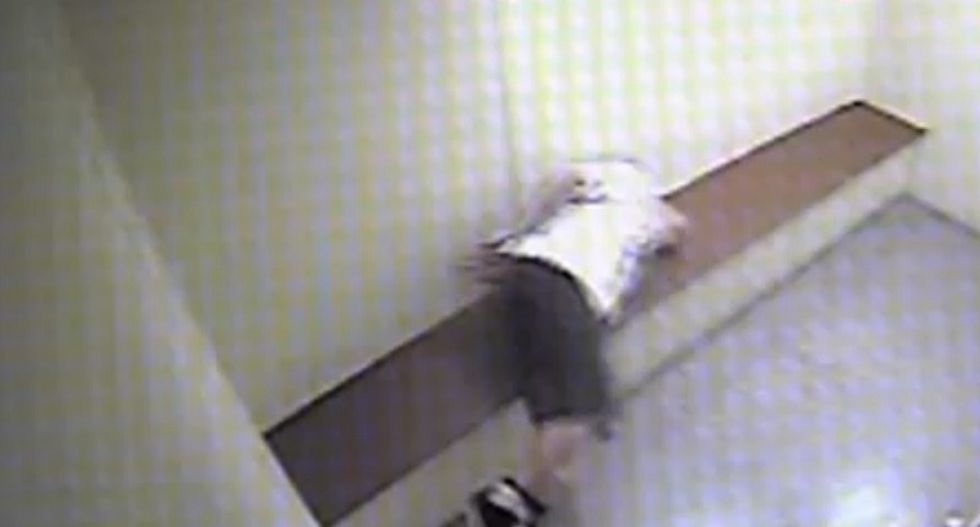 A Florida police officer and sergeant were fired after a man who was arrested for skipping out on a $60 bar tab was kneed so hard it ruptured his spleen. He was then left screaming in pain a cell for two hours, the Orlando Sentinel reports.

Robert Liese, 41, was drunk when he was arrested last year. The handcuffed man broke some glass on a cell door when he banged his head into it. In response, Orlando Police officer Peter Delio reportedly entered his cell and kneed him in the side so hard that it ruptured his spleen. He was then left alone, lying on the ground with his hands and feet bound. He cried out for help 35 times over the course of two hours, but the officers ignored him. Because of this, Delio and Sgt. William Faulkner were fired Wednesday.

Liese is suing the city and Delio is facing criminal battery charges.

"I think it's something they should have been doing a long time ago," his attorney, William Ruffier told the Sentinel about the firing. "If they had done that a long time ago and said 'this is not acceptable behavior' then they wouldn't be having the problems they are now having."

During an internal affairs investigation, Delio said he heard noise coming from Liese's cell but said he didn't know it was Liese -- though Liese was the only one in the cell. After kneeing him, Delio bound his feet together

"While on the ground, Liese can be heard and seen through the audio/video writhing in pain crying out for medical attention 35 times over the next 1 hour and 50 minutes," wrote Deputy Chief Robert Anzueto in Delio's termination letter, which was obtained by the Sentinel. "The conduct outlined in the investigation cannot be tolerated by an employee of the Orlando Police Department and undermines the employee's credibility as a law enforcement officer."

Faulkner was fired after he told internal affairs investigators Liese said he didn't need medical help, though video clearly shows he was begging for it while the officers ignored him.

Liese was taken to a hospital when paramedics were finally called and received emergency surgery for his ruptured spleen, the Sentinel reports. He pleaded no contest to minor crimes including resisting arrest without violence and defrauding an innkeeper. His lawsuit against the police department is pending.