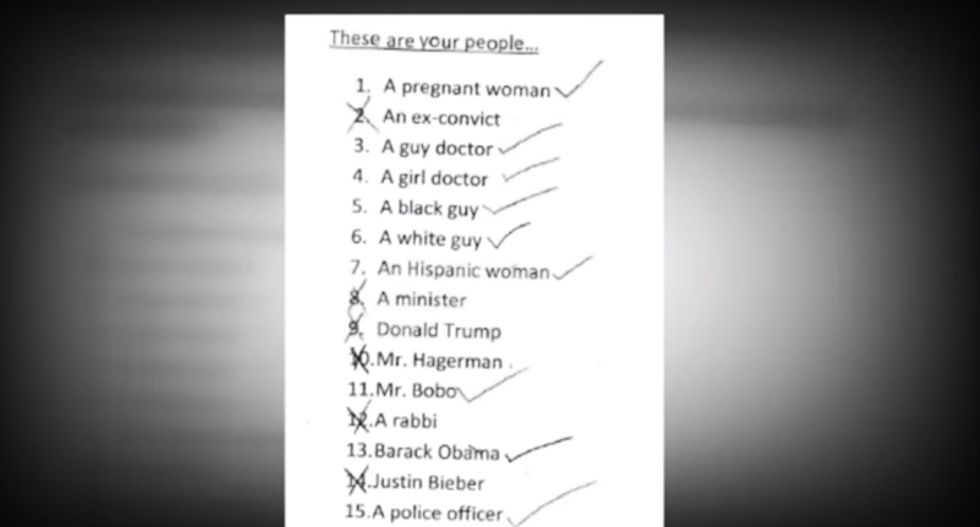 A Florida elementary school is taking heat for a "Lifeboat quiz" given to kids asking them who should live or die by forcing them to choose between "a black guy" or a "Hispanic woman,"  among others, reports Global News.

According to Valerie Kennel, her 11-year-old daughter Leah was given the quiz and asked who should live in hypothetical sea disaster where a lifeboat only has nine seats but there is a diverse cast of 15 people wanting to board.

Among the choices students found "a black guy," "a white guy," a Hispanic woman" and "a rabbi."

Along with "a police officer," and "a pregnant woman," sixth-graders must also decide if they want to save President Obama or businessman Donald Trump.

According to the mom and her daughter, the test given at Giunta Middle School disturbed some of the students who refused to complete it.

"I got kind of upset about it and everyone else in the classroom was like 'this is racist, this is racist,'" Leah recalled, noting that one student was reprimanded for protesting the test.

According to a statement from the Hillsborough County School District, the quiz was designed to promote team-building and cooperation, and is not intended to be racist.

“This school has a culturally diverse population,” the statement reads. “The test brought up good debates on how to work together, building relationships.”

Watch the video below from WFLA: