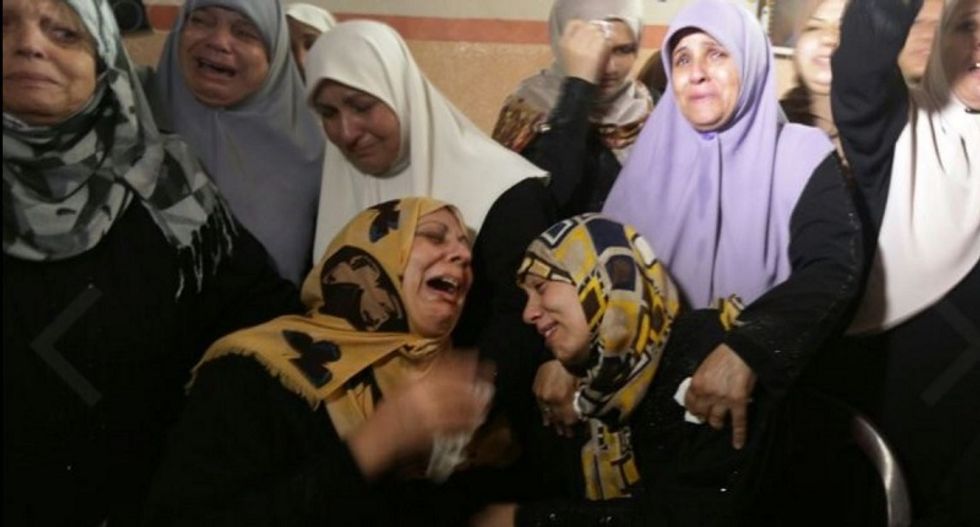 Palestinian relatives mourn during the funeral of Mahmud Homaida in Gaza City, on October 17, 2015

Four Palestinians were shot dead and a fifth wounded in attacks on Israelis in east Jerusalem and the West Bank Saturday, as violence that has fueled concerns of an uprising showed no let-up.

The violence that has raged for more than two weeks prompted a "very concerned" US President Barack Obama to call for calm.

Including alleged assailants, 41 Palestinians have been killed since the violence erupted on October 1. Seven Israelis have lost their lives.

The mounting death toll has prompted fears of a new Palestinian intifada, or uprising, like those of 1987-1993 and 2000-2005, when thousands were killed in near-daily violence.

Three of Saturday's attacks took place in the flashpoint West Bank city of Hebron, where some 500 Jewish settlers live in a heavily guarded enclave in the city centre surrounded by nearly 200,000 Palestinians.

A fourth was at a checkpoint in a Jewish settlement neighbourhood of Israeli-annexed east Jerusalem, and a fifth at another checkpoint.

In the first Hebron incident, a Palestinian tried to stab a settler before his intended victim, who was unharmed, shot him dead, the army said.

Video circulated by Palestinian activists showed a young man wearing a kippa brandishing a pistol as shots rang out before Israeli soldiers moved in to pull him away from a body lying on the ground.

In the second attack, a Palestinian girl attempted to stab a female Israeli soldier outside a border guard base before being shot dead by her would-be victim, Israeli police said.

And a Palestinian was shot after stabbing and moderately wounding a soldier, the army reported, without saying whether the attacker was killed.

Troops also opened fire at stone-throwing Palestinian youths in several sectors of Hebron, wounding 11 with rubber bullets and one with a live round, Palestinian medics said.

In east Jerusalem, a Palestinian tried to stab a soldier at a checkpoint in East Talpiot but was shot dead by other soldiers.

Police said the assailant was a 16-year-old from nearby Jabel Mukaber, the same neighbourhood that was home to three Palestinians who carried out attacks earlier this week.

And a border guard killed a Palestinian who tried to knife him at the Qalandiya checkpoint between Jerusalem and the West Bank, police said.

Meanwhile, in the Gaza Strip, army gunfire on the border wounded at least four civilians, according to the enclave's health minister Ashraf al-Qudra.

Israeli security forces have deployed massively in Jerusalem to try to halt the attacks and, on Wednesday, began setting up checkpoints in parts of east Jerusalem, including Jabel Mukaber.

But that has failed to stop the violence.

The United States, which tried but failed last year to broker peace talks between Israel and the Palestinians, urged leaders on both sides to help rein in the unrest.

"We are very concerned about the outbreak of violence," Obama said in Washington Friday.

"It's important for both (Israeli) Prime Minister (Benjamin) Netanyahu... and (Palestinian) president (Mahmud) Abbas and other people in positions of power, to try to tamp down rhetoric that may feed violence or anger or misunderstanding," he said.

US Secretary of State John Kerry, who could travel to the region soon, has spoken separately to Abbas and Netanyahu to ask them to restore calm.

Abbas has been under pressure over recent comments that some have labelled incitement and has called for peaceful protests without explicitly condemning the violence.

But on Friday he condemned an arson attack the previous night on Joseph's Tomb, a West Bank site which is holy to Jews.

The same day, four Palestinians were killed, one after posing as a news photographer to stab and wound a soldier outside a Jewish settlement.

As hundreds of Palestinians joined the funeral of Ayad Awawdeh in the West Bank village of Dura on Saturday, his mother told AFP her son had "watched the news on television the whole time and exploded with anger at seeing so many horrors".

Such funerals may soon be a thing of the past -- Israel has warned that it may not hand over the bodies of those responsible for attacks to their families for burial.

The violence began on October 1, when a suspected cell of the Islamist movement Hamas murdered a Jewish settler couple in the West Bank in front of their children.

But subsequent attacks are believed to have been "lone wolf" operations.