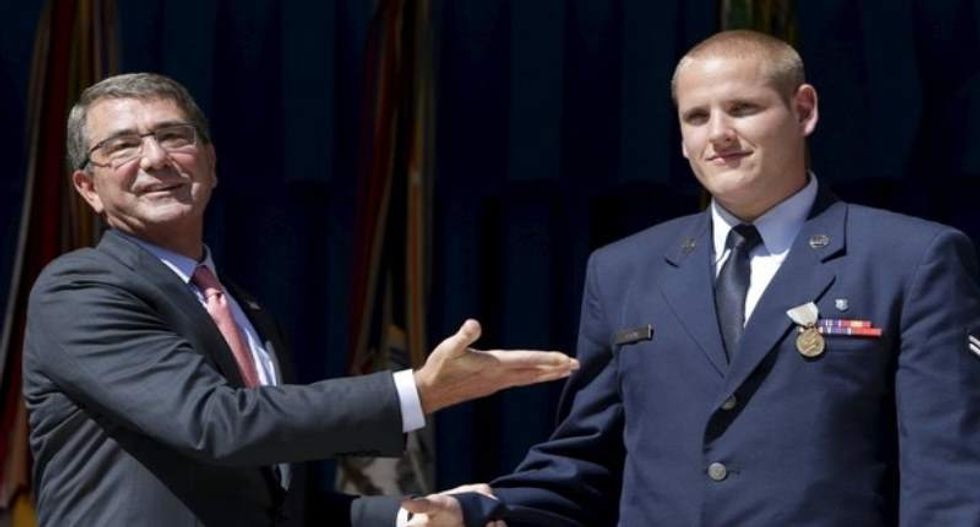 Secretary of Defense Ash Carter (L) presents USAF Airman 1st Class Spencer Stone, (Airman's Medal and Purple Heart), during awards for his role in disarming a gunman on a Paris-bound train on Aug. 21 at the Pentagon in Washington on Sept. 17, 2015. Photo by Gary Cameron for Reuters.

U.S. Air Force Airman Spencer Stone, who helped thwart a train attack in France only to be stabbed outside a bar in his California hometown, was released from the hospital on Thursday, a week after he was admitted with multiple injuries.

Stone, who along with friends Anthony Sadler and Alek Skarlatos, subdued a gunman on a high-speed train bound for Paris in August, was stabbed in the torso several times in what police described as a "nightlife-related incident" in Sacramento's busy midtown district.

"Thanks to everyone who has sent encouragement during this challenging time," Stone said in a statement posted on the website of the University of California, Davis, Medical Center in Sacramento. "I'm focused now on healing and recovering and look forward to the next part of my journey."

Police have not said what prompted the altercation that led to the Oct. 8 stabbing, and have not located Stone's assailant.

The fight was not related to Stone's role in the train incident and there was no connection to terrorism, Sacramento Deputy Police Chief Ken Bernard said. Stone's assailant is not believed to have known Stone's identity.

Stone, Sadler and Skarlatos, a member of the Oregon National Guard, were touring Europe, partly to celebrate Skarlatos' return from a tour of duty in Afghanistan, at the time of the train incident.

They won accolades for their actions from the presidents of France and the United States and were feted back home in Sacramento with a parade.