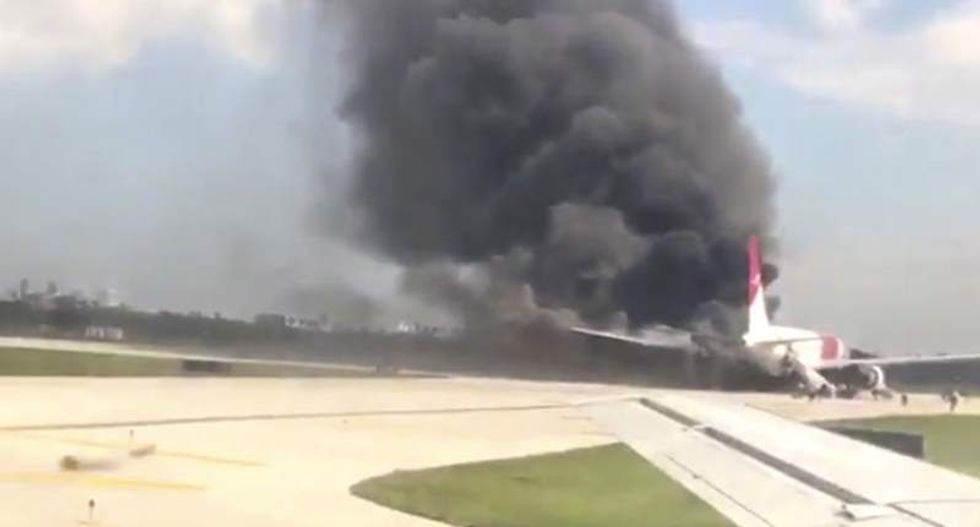 A still image from a handout video footage by Mike Dupuy, a passenger in another airplane, shows Dynamic International Airways' Boeing 767's engine on fire in Fort Lauderdale, Florida, on Oct. 29, 2015. Photo by Mike Dupuy for Reuters.

An engine on a passenger jet bound for Caracas, Venezuela, burst into flames while taxiing for takeoff at a Florida airport on Thursday, forcing frightened passengers to exit the plane using inflatable emergency slides.

Fifteen people were injured, one seriously, as 101 passengers and crew evacuated the Dynamic International Airways' Boeing 767-200ER within minutes of the pilots realizing there was a problem.

The 29-year-old aircraft was leaking fuel before departure, the Federal Aviation Administration said, and its crew was warned about the leak by a jet taxiing behind it.

In video shot by a passenger on another plane, towering clouds of thick gray smoke could be seen billowing from the Dynamic flight before the blaze was extinguished. (Video: http://reut.rs/1P8bvzk)

Most of the injuries were bumps and bruises, Michael Jachles, a spokesman for the Broward Sheriff's Office, told reporters. One child was among those being treated at Broward Health Medical Center, a hospital spokeswoman said.

Luis Campana, a 71-year-old rancher, was traveling to Venezuela's Guarico state with his wife and sister.

"It was a real scare," Campana told Reuters at Fort Lauderdale-Hollywood International Airport. He said he had been sitting near the front of the plane as the pilot put the thrust on to taxi up the runway.

"The engine exploded. As we were getting out of the plane down the chute, the smoke was beginning to enter and the engine was in flames," he said.

The accident could have been catastrophic had the jet taken off with a fuel leak, Greg Feith, a former crash investigator for the National Transportation Safety Board, told Reuters.

"Once the aircraft is airborne, it becomes a flying blowtorch," Feith said. "The fire intensifies and you don't know what system or structure it's going to burn through."

Fire could damage a wing and fuselage, or cripple hydraulic and electronic control systems, Feith said, potentially making an emergency landing impossible. It could also ignite fuel tanks in the wings, especially if fuel vapor were present, he said.

Flight crew audio broadcast by CNN captured the moments those on the Venezuela-bound jet were warned of the danger.

"Hey, yeah, Dynamic, the left engine looks like it's leaking, I don't know, a lot of fuel. There is fluid leaking out of the left engine," a voice can be heard saying.

Officials got a call at 12:34 p.m. EDT (1634 GMT) that Dynamic Airways flight 405 experienced a left engine fire while taxiing on one of the airport's two runways.

Passengers had been completely evacuated by 12:37 p.m., Jachles of the sheriff's office told a news conference.

Natalia Vargas, 50, said her 75-year-old mother phoned her from the plane and said there had been two strong explosions.

"There was a lot of smoke," said Vargas, who lives in Miami and is originally from Venezuela. "Everyone was very nervous, but everyone was off the plane quickly," she said.

The fire came less than two months after an engine on a British Airways jetliner caught fire in Las Vegas as the plane was about to take off for London, forcing all 172 passengers and crew to escape down emergency slides.

The NTSB is sending four people to Fort Lauderdale to investigate the latest fire, the agency said.

Feith, the former NTSB investigator, said they will try to determine the source of the fire and why it caused so much damage, and could recommend modifications to the 767 fleet and general airline procedures to prevent a recurrence.

Greensboro, North Carolina-based Dynamic said it has operated wide-body aircraft since 2009 and will investigate the fire.

The carrier flies from Fort Lauderdale and New York's JFK airport to Caracas and Maracaibo in Venezuela, as well as to Georgetown in neighboring Guyana, according to its website.

Dynamic said it was arranging accommodation and transport for all the passengers impacted, and that it expects to continue operations as per its schedule on Friday.

The plane was powered by Pratt & Whitney JT9D engines, said a spokeswoman from Pratt & Whitney, a unit of United Technologies Corp . Boeing Co said in a statement it is providing technical assistance to the NTSB investigation.

Dynamic's 767-200ER was built in 1986, and only seven such planes of that age or older remain in service out of 65 built, according to aircraft appraisal firm Collateral Verifications.

Mass. mom killed her three kids after hearing voice 'telling her to': report

A Massachusetts mom accused of murdering her three children said she heard a man's voice inside her head as she strangled each child with an exercise band, People magazine reported.

The details of the killings were shared by prosecutors investigating Lindsay Clancy, 32, for the killings of her five-year-old daughter Cora, three-year-old son Dawson and seven-month-old son Callan. Clancy then attempted to take her own life, the prosecutors said.

Kate Mcgee, The Texas Tribue
Gov. Greg Abbott’s office is warning state agency and public university leaders this week that the use of diversity, equity and inclusion initiatives — policies that support groups who have been historically underrepresented or discriminated against — is illegal in hiring.

In a memo written Monday and obtained by The Texas Tribune, Abbott’s chief of staff Gardner Pate told agency leaders that using DEI policies violates federal and state employment laws, and hiring cannot be based on factors “other than merit.”

Pate said DEI initiatives illegally discriminate against certain demographic groups — though he did not specify which ones he was talking about.