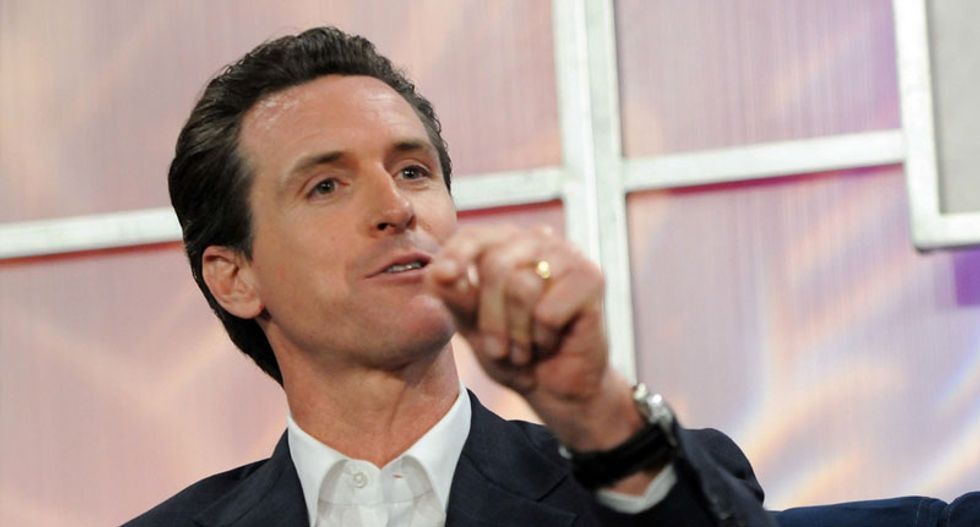 Newsom hopes to put the initiative before voters in the November 2016 election.

Speaking in downtown San Francisco at the site of a shooting that killed eight people in 1993, Newsom said elements of the measure, some of which were unable to pass via the legislative process, would be strongly supported by California voters.

"I'll say this to the NRA, ... you can intimidate politicians, we've seen that. Hell, you've been effective. But you can't intimidate the public," said Newsom, referring to the National Rifle Association, the influential gun rights lobby. "That's why we're bringing this directly to the public."

The initiative would also require gun owners to report lost or stolen guns to law enforcement and improve data sharing between the state and the federal government's criminal background check databases.

It would also set up a process to relinquish guns from convicted felons who are already prohibited from possessing them.

To be included on the 2016 ballot, Newsom and his backers would have to gather signatures from 366,000 registered voters who support putting the question on the ballot – a process that could cost $2 million or more – and then raise funds to fend off a likely onslaught of opposition from gun advocates.

In an interview with Reuters on Thursday, Newsom said several wealthy Californians had already promised to donate money for the campaign, and that he expected grassroots donations to come in as well.

Newsom, a former San Francisco mayor, who will also need to be raising funds for his gubernatorial campaign, said that a recent spate of mass shootings including one earlier this month at a community college in Oregon where a gunman killed nine people, led him to feel he had no choice but to act.

"I couldn't even put out a press release after Oregon," Newsom said. "I felt like a fraud. I've sent out so many press releases with all the pabulum in the world expressing my prayers and I just can't keep doing that. ... I've got to be accountable."

In a statement, NRA spokeswoman Amy Hunter said Newsom's initiative was an attempt to chip away at the rights of gun owners and would do nothing to improve public safety.

"California illustrates the true gun control agenda, which is the ultimate confiscation and banning of firearms," Hunter said.

Newsom on Thursday also took a swipe at Republican presidential candidate Jeb Bush for saying "stuff happens" in response to a question about the Oregon school shooting.

Bush said he did not believe more government regulations were the answer to gun violence.

"Stuff doesn't just have to happen," Newsom said. "We have the capacity to turn this around."